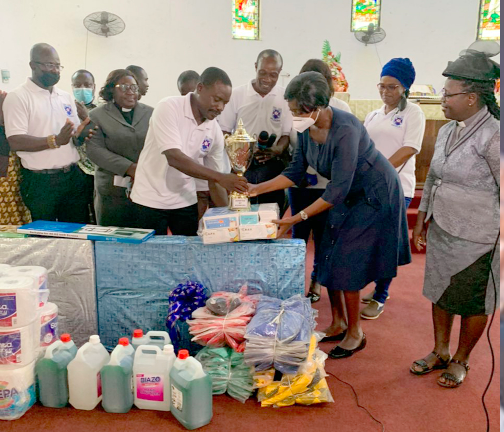 Mr Ebenezer Adotey Adotei, President of the 1986 year group, presenting the items to Mrs Wilhelmina Obuobisa-Atakora, Headmistress of the school

The items, which included jerseys, sanitisers, tissue paper and detergents, cost GH¢8,000. The presentation to the school was part of activities marking the 40th anniversary celebration of the school.

The members of the 1986 year group are the pioneer students of the school.

Speaking after the presentation, the President of the year group, Mr Ebenezer Adotey Adotei, said the presentation was the first in a series to support the 40th anniversary of the school.

He said it was also to motivate other year groups to identify pressing needs of the school and help solve them.

The Headmistress of the school, Mrs Wilhelmina Obuobisa-Atakora, who received the items expressed appreciation to the year group.

She appealed to them to help the school meet its pressing needs in order to deal with the increasing population of students.

For his part, the first headmaster of the school, Mr Solomon Annang, who was present at the presentation, entreated other year groups to emulate what the pioneering year group had done.

He bemoaned the lack of discipline in some schools across the country, citing the prohibition of corporal punishment as a cause.

Mr Annang was of the view that corporal punishment in school should not have been scrapped, explaining that it served as a guiding tool to correct students who went overboard.