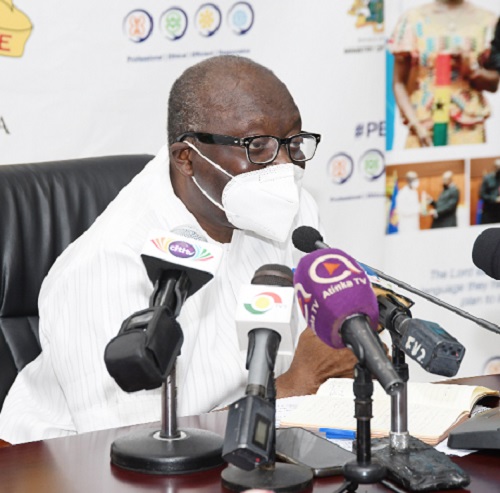 The Minister of Finance, Mr Ken Ofori-Atta, has described the free Senior High School (SHS) programme being implemented as one of the top investments by the government to develop the country’s human resources.

He said the initiative was a significant intervention to ensure that Ghanaian children, no matter where they came from, had access to education.

Mr Ofori-Atta said this at the closing session of the 73rd New Year’s School and Conference last Wednesday.

He was speaking on the three top investments he thought the government had made in response to a question posed by the Chief Executive Officer (CEO) of Ghana Enterprises Agency (GEA), Mrs Kosi Yankey-Ayeh, who facilitated the event at the Cedi Conference Centre at the University of Ghana.

The two-day event was on the theme: “COVID-19 and socioeconomic dynamics in Ghana”.

Mr Ofori-Atta said at the beginning of the independence of the country, Ghana’s First President, Dr Kwame Nkrumah was very clear about the issue of education, which put the country in a very good stead by producing personalities such as the late United Nations Secretary General, Kofi Annan among other personalities.

According to him, the free SHS allowed for “social mobility -therefore, it does not matter where you come from, what your name is.... and that you can go through without need to have financial burden, then the nation should do that.”

“We have seen some 400,000 more students go through the free SHS programme and I think that’s just infinitely important to change the sense of belonging as a citizen on your rights to do that to also improve yourself,” he said, adding, “so that for me, has been key”.

Another issue Mr Ofori-Atta said was the decentralisation of agriculture where about 1.5 million farmers had been brought into the mainstream, as well as the exportation of some products.

The minister also spoke about other issues including industrialisation and cited the commencement of operations of VW, support for Kantanka and other firms.

“So that is what we see and all of this also now anchored by the GHc100 billion ‘Obaatan pa’ Ghana Cares Programme which would ensure sustainability,” he said.

Again, he mentioned the country’s production of half of the about 1.4 million tonnes of rice it consumed through the Ghana Cares programme to reduce the import of the product.

Those initiatives, among others, he said showed a country building its human capacity and its industry.