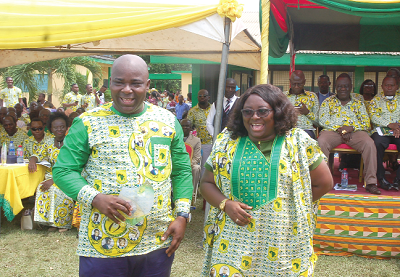 The Minister of Transport, Mr Kwaku Ofori Asiamah, has said the introduction of the double-track system in some selected Senior High Schools (SHSs) under the Free Senior High School programme has led to the enrolment of additional 200,000 Junior High School (JHS) leavers in various SHSs across the country.

He said the extra 200,000 JHS leavers would have been left in the house as a result of lack of space to accommodate them, pointing out that the implementation of the system had allowed for the best use of the space and resources available in schools throughout the year.

Mr Ofori Asiamah made the statement when he represented President Nana Addo Dankwa Akufo-Addo as the special guest of honour at the 75th Anniversary Speech and Prize-giving Day of the Ghana Senior High School in Effiduase - Koforidua in the Eastern Region last Saturday.

Mr Ofori Asiamah, who is an old student of the school, said between 2013 and 2016, about 100,000 children who passed their BECE every year and were placed in senior high schools, did not take up their place.

He said in 2018, the number of candidates who registered for the BECE jumped from 468,060 in 2017 to 521,710, and described the initiative by the Ministry of Education as the best option to manage the existing problems of infrastructure and space in the various SHSs.

According to the minister, the government was engaging about 8,000 extra teachers into the various SHS, and indicated that he further noted that the Ghana Education Trust Fund (GETFund) had secured a $500 million facility to enable it invest in school infrastructure to cope with the rising numbers.

The Headmaster of the school, the Very Reverend Abraham Osei Donkor, said the performance of the school in the West Africa Senior School Certificate Examination (WASSCE) had improved tremendously.

“We are turning over 85 per cent of our students into the tertiary institutions in recent years”, he said.

The Chief Executive of MIKADDO Holdings, Mr Michael Addo Agyekum, suggested that the double-track system of education  should engage those students who would be at home for a semester to do compulsory vocational training, to bring out inherent talents of the students, for their growth and development.

The Boys’ Prefect of the school, Master Martin Ohemeng Gyekye, said the school had chalked successes in academic work and in various sporting disciplines.

He appealed to President Akufo-Addo, through the Minister of Transport, to assist the school to get a school bus.

GHANASS was founded in 1943 by Mr Fred Addae with assitance from Mr Francis Adjei Tetebo at Koforidua with an initial uintake of 16 boys.

In 1957, year that Ghana gained independence, Osagyefo Dr Kwame Nkrumah on a visit to Koforidua requested a name change of the school from Christ College to the Ghana Secondary School.

The change was made in line with other government established secondary schools such as the Ghana National College in Cape Coast and the Ghana Secondary Technical School in Takoradi, which were then in operation.