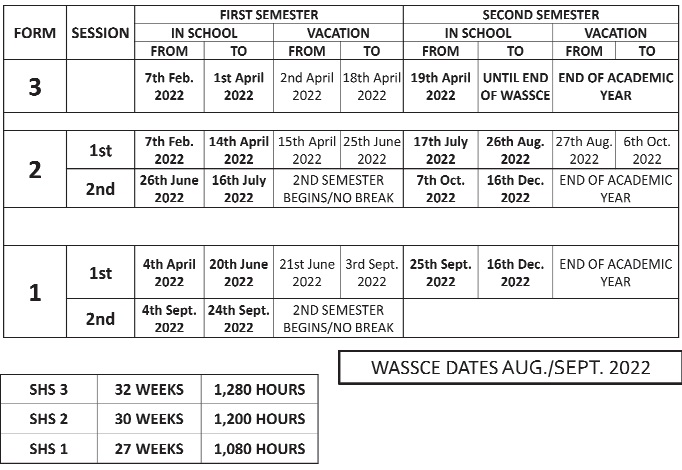 The Ghana Education Service (GES) has announced that all public basic schools will begin the 2022 academic year on January 18, 2022.

Also, all SHS Two and One students who are currently in school to write the end-of-second-semester examinations are expected to come home on January 28 and return to school on February 7 to begin the new academic year in new forms – SHS Three and Two, respectively.

Additionally, prospective SHS One students who are awaiting the release of their Basic Education Certificate Examination (BECE) results by the West African Examinations Council (WAEC) are expected to begin their first semester of the academic year on April 4, 2022.

Briefing journalists on the calendar in Accra yesterday, the Director-General of the Ghana Education Service (GES), Prof. Kwasi Opoku-Amankwa, explained that per the calendar released, the current double-track system had been revised, such that the current SHS One students who are running the double-track would report to school the same date.

"What it means is that at any given time, two forms will be in school, while one form will be home.

"So the current SHS One students who are running double track, both Green and Gold tracks, will be in school at the same time," he explained.

Describing the calendar as a transitional one, Prof. Opoku-Amankwa said the ministry and the GES were making efforts at bringing the academic calendar back to normalcy, with the academic year beginning from September/October and ending in June/July.

He announced that henceforth, all pre-tertiary schools would run a semester session like the SHSs, adding: "However, for basic schools from KG to JHS Three, their semesters will be in sessions."

He explained that unlike SHSs, basic schools would have a short break in every semester, explaining that the idea was to ensure that both JHS students and basic school pupils vacated and reported to school together.

After nine months of the closure of all schools occasioned by the outbreak of the coronavirus disease (COVID-19) pandemic, the government announced a new schedule for reopening.

In his 21st address on the COVID-19 update, President Nana Addo Dankwa Akufo-Addo had announced that all tertiary schools would resume on January 9, 2021, while JHS and basic schools reopened on January 15, 2021.

That meant that the academic calendar that ran from September to August had changed to January to December for basic schools and January to November for tertiary institutions.

However, after a year of that schedule, the Ministry of Education put together a team to review the schedule and propose a new one.

A committee set up by the ministry to undertake that job submitted the proposed calendar for the next three years.

The Minister of Education, Dr Yaw Osei Adutwum, explained that the committee’s work was to help find a lasting solution to challenges associated with academic calendars over the years and bring certainty to the dates.