15% fee increase based on parliamentary approval — University of Ghana Management 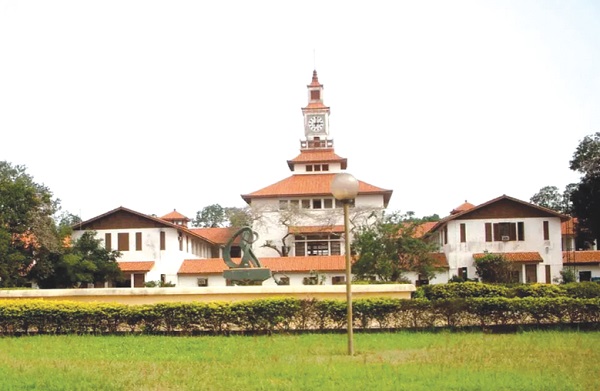 The University of Ghana — Fee increment is based on approval by Parliament
30.5k Shares

Continuing students have raised concerns about the fees being charged by the University of Ghana for the 2022/2023, saying it will make access to university education difficult.

Instead of the approved 15 per cent, students of University of Ghana are required to pay 20 per cent, five per cent more.

The University Students Association of Ghana (USAG), in a statement to react to the new fees being charged, said: “The recent astronomical hikes in school fees of public universities in the country will make access to education become increasingly difficult.”

However, the university maintains that the fees being charged are legal as they are based on approved fee levels as authorised by Parliament.

This year, continuing students in the humanities are required to pay GH¢1,524 while students offering Law and Administration will pay GH¢1,640 instead of the GH¢1,098 and GH¢1,688 paid respectively.

The university said to make the situation bearable for students, it had rolled out a payment plan for students to pay their fees in tranches, instead of at a go.

"The university recognises the current difficult economic situation in the country, and as such has provided for flexible fee payment terms for students.

"For example, students are allowed to register for the first semester upon payment of 50 per cent of their academic facility user fees, with the remaining amount due in the second semester," a statement signed by the Registrar of the university, Emelia Agyei-Mensah, said.

Additionally, it said students with genuine financial difficulties were encouraged to apply to access support through the University’s Students Financial Aid Office, adding that management operated an open-door policy and had engaged student leadership on these issues.

"We will continue to dialogue with student leaders, the general student body, parents and guardians and all stakeholders for a better understanding and appreciation of all matters that concern the welfare of stakeholders of the university," the statement further said.

Mrs Agyei-Mensah said the University of Ghana found it necessary to set the records straight and to correct false information being circulated about adjustments of Academic Facility User Fees by the University for the 2022/2023 academic year.

The statement emphasised that the adjustment was based on rates approved by Parliament and communicated through the Ghana Tertiary Education Commission (GTEC).

For the sake of clarity and to ensure that students and stakeholders were not misled, it said in the 2019/2020 academic year, “public universities, including the University of Ghana, were given approval by Parliament to increase their fees by five per cent cumulatively based on the 2016/2017 approved fees.

The statement said though the gazetted approved fees for 2019/2020 academic year were found to be higher than what the university had earlier requested students to pay for the academic year, the university management decided to suspend the implementation of the new fees until the 2020/2021 academic year.

That, it said was to spare students from a fee increase in the middle of the 2019/2020 academic year.

Responding to the statement from the management of the University of Ghana, the General Secretary of USAG, Bismark Yaw Ofori, told the Daily Graphic that the universities must be considerate in charging the fees in view of the increasing cost of living.

He said although the university had some cost incurred in running the institution, it was able to suspend some fees till now and “we are pleading with them that even if they are going to increase the fees, they should just consider the 15 per cent instead of adding the other five per cent they were supposed to charge from 2019”.

Mr Ofori advised students to remain calm, do the 15 per cent calculation and pay as USAG continued to engage the university management.

“The university is allowing for part payment, it means they can pay and even if we are not successful with our negotiations, they can later go and pay the difference,” he said.

In 2021, the management of the University of Ghana accepted a plea from the student leadership (SRC and GRASAG) to further suspend the implementation of the parliamentary approved and gazetted fees until the 2021/2022 academic year.

“Following all the necessary internal consultations and approval by the University Council, on December 13, 2022, the university announced that due to the increasing cost of operations, it had become necessary for the university to implement the 2019/2020 approved fees.

On December 21, 2022, the university received a letter from GTEC dated December 16, 2022, communicating that Parliament had approved an upward review of academic fees by “...15 per cent of the last approved rates”.

“It is important to note that the only previously approved fees were those gazetted in 2019/2020 (Ref.RMERD/ NTPU/12/19/ MDAS/FEES/5) and not the subsidised rates the university had to implement due, initially, to the late timing of the fee announcement in January 2020, and later by concessions made due to COVID-19 and pleas from student leadership,” it said.