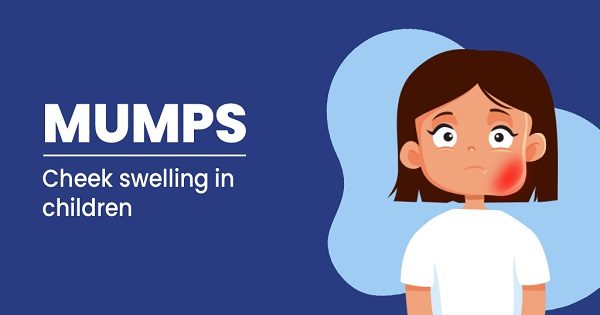 For the past few weeks, I have received a lot of emails about mumps outbreak in schools. Most of the mails talk about possible infertility as a complication. I, therefore, write on mumps this week to allay their fears.

Mumps or epidemic parotitis is a viral infection that affects the salivary glands. There are several sets of these glands, but the one mostly affected is the parotid gland located near the jaw. It is caused by the mumps virus. It is a very common disease of childhood worldwide, but more especially in the developing world because of the advent of vaccination for this virus introduced in the developed world.

It is a contagious disease that is spread from person to person through contact with respiratory secretions and saliva from an infected person. When an infected person coughs or sneezes, the droplets aerosolise and can enter the eyes, nose or mouth of another person. Mumps can also be spread by sharing food, drinks and kissing. The virus can also survive on surfaces and  spread after contact in a similar manner. A person infected with mumps is contagious from approximately six days before the onset of symptoms until about nine days after symptoms begin. The incubation period (time of infection until symptoms begin) can be from 14–25 days, but is more typically from 16–18 days. It was so contagious that we were admonished not to laugh at people with mumps, else we risked contracting it when we were young.

Cases of mumps may start with a fever (over 39° C), as well as a headache and loss of appetite. The well-known hallmark of mumps is swelling and pain in the cheek (parotid glands), making the child look like a hamster or rabbit with food in its cheeks. The glands usually become increasingly swollen and painful over a period of one to three days. The pain gets worse when the child swallows, talks,chews or drinks acidic juices.

Both the left and right parotid glands may be affected, with one side swelling a few days before the other, or only one side may swell. In rare cases, mumps will attack other groups of salivary glands instead of the parotids. If this happens, swelling may be noticed under the tongue, under the jaw or all the way down to the front of the chest.

Mumps in adolescent and adult males may also result in the development of orchitis, an inflammation of the testicles. Usually, one testicle becomes swollen and painful about seven to ten days after the parotids swell. This is accompanied by a high fever, chills, headache, nausea, vomiting and abdominal pain that can sometimes be mistaken for appendicitis if the right testicle is affected. After three to seven days, testicular pain and swelling subside, usually at about the same time that the fever resolves. In some cases, both testicles are involved. Even with the involvement of both testicles, sterility is only a rare complication of orchitis.

Additionally, mumps may affect the pancreas or, in females, the ovaries, causing pain and tenderness in parts of the abdomen. In some cases, signs and symptoms are so mild that no one suspects a mumps infection. Other symptoms of mumps can include dry mouth, sore face and/or ears and occasionally in more serious cases, loss of voice.

A physical examination confirms the presence of the swollen glands. Usually, the disease is diagnosed on clinical grounds and no confirmatory laboratory testing is needed. If there is uncertainty about the diagnosis, a test of saliva or blood may be carried out. A newer diagnostic confirmation, using a Polymerase Chain Reaction (PCR) technology, has also been developed but is not available in Ghana. An estimated 20 to 30 per cent of cases are asymptomatic as with any inflammation of the salivary glands, serum amylase, an enzyme that helps with digestion of carbohydrates, is often elevated.

The most common preventive measure against mumps is immunisation with a mumps vaccine, which may be given separately or as part of the MMR vaccine (Measles, Mumps and Rubella). The World Health Organisation (WHO) recommends the use of mumps vaccines in all countries with well-functioning childhood vaccination programmes. In the United Kingdom, it is routinely given to children at age 15 months. The American Academy of Paediatrics recommends the routine administration of MMR vaccine at ages 12–15 months and a booster at four to six years. In Ghana, the vaccine given is MR (Measles and Rubella) and MMR. However, the vaccine is available in certain private facilities such as Akai House Clinic.

Due to the outbreak in schools, many governments have established vaccination programmes to prevent large-scale outbreaks. In Ghana, periodic outbreaks have been recorded as is being recorded now in many schools. Awareness campaigns may help get a lot of children immunised against this virus. The public health outfit of the ministry of health may have to take this up.

Some people protest against the administration of a vaccine against mumps, claiming that the attenuated vaccine strain is harmful, and/or that the wild disease is beneficial. There is no evidence whatsoever that the wild disease is beneficial. Recently, the coverage of MMR vaccination dipped in the developed world due to claims that the MMR vaccine is associated with development of autism and inflammatory bowel disease. However, all further studies since that time have indicated no link between vaccination with the MMR and autism or bowel disease, and the researchers who falsified those findings have been punished.

Before the introduction of the mumps vaccine, the mumps virus was the leading cause of viral meningoencephalitis in the United States. However, encephalitis occurs rarely (less than two per 100,000) after the vaccines are used.

There is no specific treatment for mumps. Symptoms may be relieved by the application of intermittent ice or heat to the affected neck/testicular area and by paracetamol (Tylenol) for pain relief. In severe cases, ibuprofen (Brufen) can be used. Warm salt water gargles, soft foods and extra fluids may also help relieve symptoms.

Patients are advised to avoid fruit juice or any acidic foods such as orange, pineapple and apple juices, since these stimulate the salivary glands, which can be painful.

Death is very unusual. The disease is self-limiting, and general outcome is good, even if other organs are involved.

After the illness, life-long immunity to mumps generally occurs; reinfection, however, is possible with milder symptoms.

A member of Paediatric Society of Ghana.