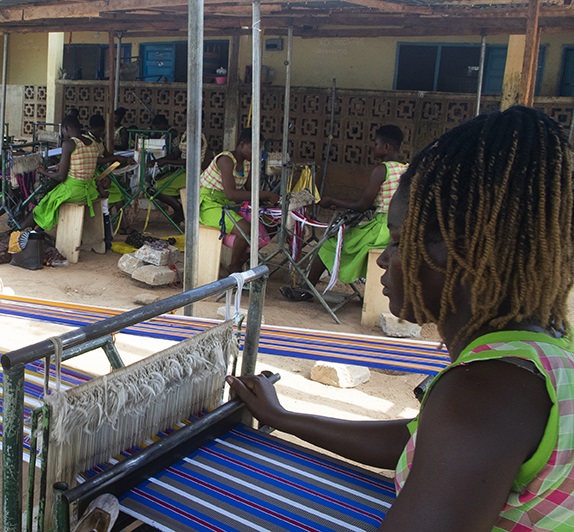 • A number of women in the Upper West Region engage in textile weaving
30.5k Shares

These are creepy days. Once in a while, however, you hear the news that excites you; that gives you hope that we just may get there.

That was exactly how I felt when I learnt first-hand that a festival of traditional textiles was in the offing in Wa. Wao!
‘My readers will love this.’ This was the first notion that came to my mind.

In Ghana, festivals are vibrant gatherings that are celebrated across communities. And for me, if they commemorate the craft and livelihood of a people, the better. This is where Woori Weaving Festival comes in. First of its kind, the event takes place during the last week of February, specifically the 26th to the 28th.

What excited me was that this festival was being organised by Nubuke Foundation, a reputable art house headquartered in Accra. What added to my amazement was the fact that I had no idea they had an outreach up that north.

So what is on offer at the Woori Festival? The Nubuke Foundation Centre for Textiles and Clay (Wa) situated in Loho specifically shall present artworks and design interventions from elsewhere and the community in particular. And that’s a treasure haul if you ask me!

Also featuring are the Nadowli Women's Weaving Association who will exhibit their dexterity at their old native textiles. There is the intellectual dimension to the festival as visitors will experience practical outcomes of research carried out with the University of Applied Arts, Vienna.

During the festival too, master craftsmen from Ghana and Mali and other PhD, researchers will showcase the prototype of a loom designed as result of iterative processes between Kofi Setordji, Master Weavers, Smiths and the team at Nubuke Foundation.

The Foundation has in the past years done work with the Schools of Deaf and Blind in Wa and these will be an important part of the workshop programmes. Their vocational training is meant to equip them with skills that make them self-sufficient adults.

In the past 10 years, Nubuke Foundation has developed and run several workshops with the students and teachers in a bid to buttress existing training and empower them with independent thinking and design innovation skills.

While the inhabitants of the Upper West are mostly engaged in farming, an extraordinary number however engage in the practice of textile weaving. With technical skills and art being passed down through generations, weaving which was a pastime is becoming the mainstay of inhabitants in Wa and surrounding areas.

Contrary to what prevails nationwide, the majority of weavers in the Upper West are women. Women’s Collectives and Associations employ up to 20 younger women as apprentices in a three-year formative programme.
So why would Nubuke invest in such an event? The Woori Festival idea came from a desire to sustain and to share a creative body of national heritage.

Then the festival angle. Where they exist, festivals have been the attraction moments in Ghanaian communities. For various communal reasons, festivals endorse identity and provide an opportunity to amplify the voices of the community.

Through communal tasks and activities, participants enjoy a sense of belonging and reaffirm their commitment to their localities with processions, rites de passages, rituals, dances, poetry, songs etc.

The organisers believe that the creativity that is embedded within the community should be celebrated and experienced. In today’s global world, the idea of a community has become dynamic, creating possibilities for knowledge and interaction.

Thus, participation was extended to experts from Mali, Benin and Austria hopefully to cross-fertilise indigenous knowledge with empirical research.

At the three-day event, patrons and visitors will interact with Master Weavers, make trade enquiries and engage with a wider community of stakeholders for their benefit.

Also participating are researchers, artists and creative people who wish to explore and showcase the synergies and connections with visual, sound, textures, shapes and performance art that can be created within these creative forms.

Those who love panel discussions will not be disappointed as invited stakeholders, rural enterprise agencies, designers and artisanal agencies will deliberate on issues peculiar to the industry, which will be of benefit to policymakers.

Another highlight at the festival is the showcase of the installation works of artists with fibre, textiles and clay.
There will also be the launch of the premier artists’ residency programme at Nubuke Foundation Textile and Clay Centre, Loho.

The Woori Weaving Festival will showcase all sorts of artistic processes: weaving demos, dyeing demos and Master Class from Master Weaver. Ooh, then there’ll be poetry, storytelling, traditional dance, music and wait for it, a Food Day! Let me stop preaching.

If you are a believer, see you live at Woori at Loho on the outskirts of the city of Wa in the Upper West Region.