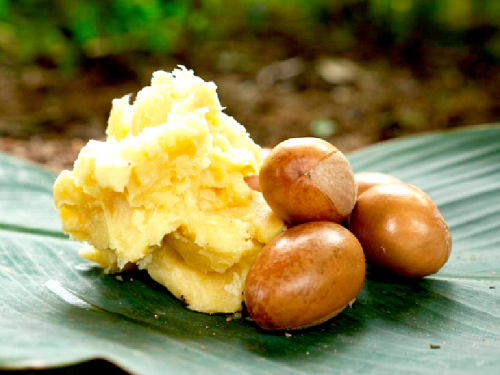 Shea nuts and its butter

After the Second World War, Britain started losing its unfettered access to the wealth of many of its tropical countries.

A major source of the wealth was an active and thriving tropical saturated oils plantations in the Far East and Africa.

The British invested substantial know-how, effort and substance in the tropical saturated oils. The loss must have been huge.

By the 1950s, the Americans, a friend of the British, was claiming that certain polyunsaturated fatty acids were essential for humans, though many experts, including T. P. Hilditch, were warning about the long term effect of such fatty acids on health.

Various research studies have now shown that the abiding ingestion of polyunsaturated fatty acids can be very harmful to animals, including humans.

After the 1960s, Britain had to compete with others to obtain their supply of many resources, including tropical saturated oils.

The British set-up a royal commission to study how to reduce the effect of the loss of tropical resources.

These two countries, with the endorsement of the World Health Organisation (WHO), have been preaching that saturated oils are unhealthy for food.

Consequently, the nutrition and health professionals in Ghana officially say unsaturated oils are more suitable for food, to the disadvantage of Ghana’s natural indigenous tropical oils.

Current research studies based on molecular analysis and laboratory tests have provided succinct evidence that many of the non-communicable epidemics are related to the abiding consumption of bland unsaturated oils.

Bland unsaturated oils contain high levels of polyunsaturated fatty acids, which have been identified as the mediator of many diseases.

A few examples are:

In the past, when our ancestors were eating tropical saturated oils, with their natural aroma, most of the above diseases were very rare.

The diseases of those days were due to poor hygiene and insanitary conditions.

Bland oils have been bleached and deodorised at a very high pressure and temperatures beyond 200oC.

They have very high levels of trans-fats, which the WHO has declared to be harmful.

During the early 2000, biodiesel was recommended for its economic benefits, though the financial benefits were not properly justified.

Overused restaurant oils were licensed to serve as biodiesel. The production cost of biodiesel is higher than the ordinary diesel fuel.

On October 14, 2011, the China Daily published that the Chinese health and food safety watchdogs are seeking an effective way to distinguish between bland processed ‘gutter oil’ and normal bland cooking oil.

Currently, Ghanaians spend many hundreds of millions of cedis on bland oils, which type of bland oil and what are the consequences?

The writer is a system scientist, a problem solver/consultant.

He lives at Esiama in the Western Region.