Traders in the Central Business District (CBD) of Accra have described this week’s Christmas shopping as “3nk) koraa,” to wit, business is slow but are hoping that trading activities picks up today.

According to them, people were not even asking for prices of goods but just moved past their wares.

Many traders were seen roaming about with their items, especially children’s clothings, with the hope of attracting potential customers.

There were those who had come out of their shops to arrange some of their wares on the pavement, saying, “people are not walking in so we have to come out”.

Visit
On Monday when The Mirror visited the CBD, traders were all over with their wares although the usual human traffic, tension, hustle and bustle had not heightened.

The main streets leading to the Makola Market had less people walking on the side ways.

All kinds of decorations were available for sale

Fabric sellers and vendors of children’s clothes who had positioned themselves on the side ways had few people crowded around them and some traders were angry at potential customers who refused to buy after touching their wares for long.

It was not difficult to move on the pavements or to access the streets.

The popular firecrackers (known as knockouts) were not seen at their usual spots at the CMB Market but there were many Christmas toys.

There were beautiful items on the market including sequence fabrics and selling at GH¢40 per yard, ladies bags, some going for as low as GH¢15; colourful bow ties selling at GH¢5 and already made children’s clothing displayed at GH¢100.

Already made shirts for young men were selling for as low as GH¢15, a 5x5 kilogramme sack of rice was going for GH¢190 while a pack was sold for GH¢40, depending on the brand.

There were all kinds of branded sardines and spaghetti on sale.

The Mirror also observed that aside the market being less congested than last year, many hawkers were selling at strategic points due to the presence of city guards while head porters looked relaxed as they sat on their pans.

Some of them complained that business was slow.

Head porters taking it easy on their pans

Some traders this reporter spoke to said they were hopeful to cash in on sales by Friday but others did not entertain such hope.

A children’s clothes seller at Tudu, Mama Ladey, said sales had been very bad from last Saturday but hoped to make sales today.

“By Friday all those who have not bought clothes for their children will be here. Those who do not have money too would have gone to borrow to come and buy”, she said.

Auntie Fati, who sells local spices in front of COCOBOD, said business had not been encouraging but she was expecting more sales by Friday, adding that “for now it is the usual business, people are just buying in small quantities”. 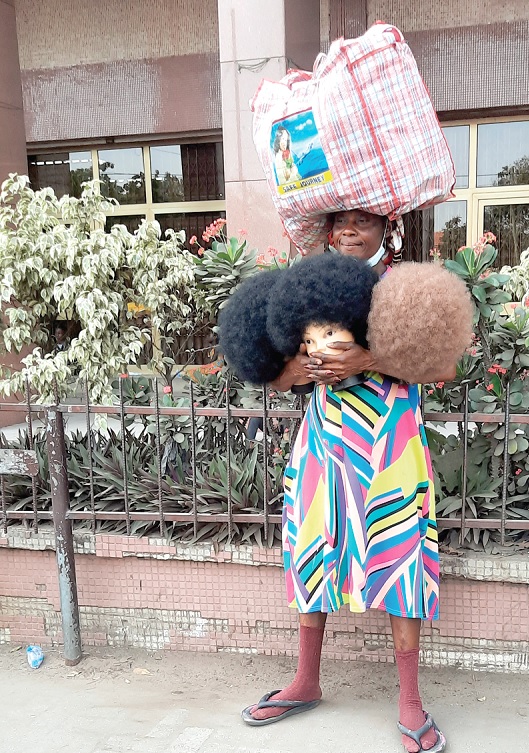 One of the many hawkers waiting for customers

A tomato seller at the Makola market, Auntie Naa, said sales had not been bad except that they were not selling as fast as they should.

Some Christmas decoration vendors on the pavements at Kantamanto seemed to be having a field day as people crowded around them, and that made it difficult for other pedestrians to move freely.

One of the vendors, who gave her name only as Esi, said business was going on quite well and she also banked her hopes on making more profit by Friday.