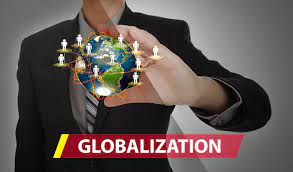 There are reasons, aplenty, for me to start my reflections on globalisation yet again. It is well over 25 years since l was first exposed to “globalisation” as a topic and concept, its advantages and disadvantages. It was in 1997 and l was in graduate school trying to secure an MBA degree.

In the 1990s, globalisation was a huge topic for many (perhaps it is now but with a different level of focus), and my lecturers loved it too. It was very easy to find examination questions always coined with a slant on globalisation because it affected or as they said, had the potential of affecting all aspects of society.

The significant driver of the globalisation “movement” in the 1990s was technology, as the Internet, in particular, had squeezed the whole world onto a screen. The Internet was still developing though, and technological development was not as vibrant as it is today, admittedly, with very slow adoption.
But something significant was still taking place. There were policy makers and thinkers who were still sure that the technological progress made then could still serve as the springboard for the “Global Village” concept.

Distances could be “shortened” and barriers to trade could all be removed when more and more technology was adopted and, backed by strong diffusion strategies, could bring great advantages to the global economy. This was the underpinning argument by most of the supporters of globalisation.

“The process by which businesses or other organisations develop international influence or start operating on an international scale” is how globalisation is captured in most literature. So in the 1990s, as it is now, trade was still an enabler of globalisation.

As trade developed further, the “war on trade” also began to intensify. Then, there was literature on “banana wars” market access, subsidies and so on. Oh yes, China’s decision to join the World Trade Organisation at the time also dominated headlines and academic research interests. Anti-Chinese sentiments centred on potential “dumping” market access restrictions, quality and standards issues, and so on.

All of these are events that l witnessed myself in the 1990s— and even had to take class lessons and write examinations on various topics as they related to the bigger subject of globalisation. Of course, the globalisation movement had started long before the 1990s and I am only reflecting on what l had witnessed and experienced.

As l explained in the April 18, 2020 edition of this column, “The effects of globalisation have come to stay and the past protectionism stance, which was successful to an extent, can no longer work in this era of increased interdependence.

“Today, the effects of globalisation are no longer felt by humans alone. Birds and sea life, for example, equally suffer when the attendant problems of globalisation create a spill-over effect.
“Past cases associated with oil exploration and accidents should remind us all of how connected the world is; you may be exploring for oil in Alaska but an accident there can be felt in almost every sea in the world. And the COVID-19 is a reminder that a safer world is for the benefit of all, and not just a few.”

In fact, in the March 14, 2020 edition also, I explained how global interconnectedness could bring both threats and opportunities. “We live in an interdependent world which has become much closer in the past three decades than ever before. This has all become possible because of globalisation.

“Today, that strong connection has taught us a big lesson on why we cannot claim to be unconcerned about developments in other parts of the world. The coronavirus, according to reports, started from China, but today as the authorities in that country have managed to control the number of new infections, other countries are still experiencing escalating cases of their own,” I stated in that edition.
I hope you have followed the drift thus far, haven’t you? Well, the basics are indeed basically simple— no country is an island on its own! I mentioned trade earlier, right?

Of course, for some reasons, such as to protect the security of the State, you may find some countries actually developing products that may not have the least cost advantage, but by and large, everything within the multilateral trading system runs on resource efficiency.
I have enumerated the ills of globalisation to a very large extent, but it is not zero sum, so next week we will look at the strong opportunities that globalisation presents.