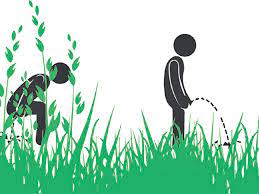 Students of Sogakope Senior High School (SOGASCO) in the Volta Region now defecate into plastic bags and throw them about.

This is  because the school does not have decent toilet facilities to cater for the student population of about 3,606 .

The practice is however more common among the female students because the males manage to use the deplorable facilities.

According to the headmaster, Newman H.K. Dziedzoave, the toilets which were built in 1974 had all caved in, compelling the students to resort to that method of attending to nature’s call, a practice which they had named ‘wrap and throw.’

The headmaster made these known at a grand durbar on the campus last Saturday to climax the 60th anniversary of the school.

The event was on the theme: Leveraging ICT Education for National Development.

Mr Dziedzoave revealed that the two existing boys’ dormitory blocks on the campus had not undergone any form of extension or renovation over the decades.

He said the washrooms for the students and staff were in a horrible state.

“The facilities are quite dilapidated and pose a health hazard on campus,” the headmaster added.

He said the girls had about six satellite dormitories, some of which were make-shift structures.

Meanwhile, Mr Dziedzoave said some students often took advantage of the porous nature of the school’s fence and sneaked out at night to spend long hours adding that some of them visited  night clubs or engaged in  “immoral” acts before returning to the campus in their own time.

The trend, he said, was on the increase “and some local residents now refer to those students as “night patrols.”

Mr Dziedzoave stated that some students were using narcotic drugs such as marijuana and tramadol, and cited instances where two students were arrested by the police outside the school compound  last year.

He said because the students were minors, they were asked to undergo parental counselling before returning to school.

While some of the students possessed cellular phones, contrary to school regulations, others were involved in amorous relations with their mates at the expense of academic their work, the headmaster said.

On a brighter side, Mr Dziedzoave said SOGASCO, a Category B school, had since its establishment been performing well academically.

For instance, for years, more than 70 per cent of the students who passed through the walls of SOGASCO each year qualified to enter tertiary institutions, he said.

In the National Science and Maths Quiz, the school sailed through to the quarter final stage in 2021, and was the first runner up at the regional level in the same year, the headmaster added.

He touched on the theme and said the world was changing faster with creativity, innovation and technical knowledge and everything was embodied in Information Communication Technology (ICT) hence, the need for an ICT/library complex.

The sick bay of the school, which was renovated by the 1994 year-group of the SOGASCO Old Students Association (SOSA), and the newly constructed two-bedroom flat for the senior housemistress which was undertaken by SOSA’79 were handed over to the school prior to the durbar.