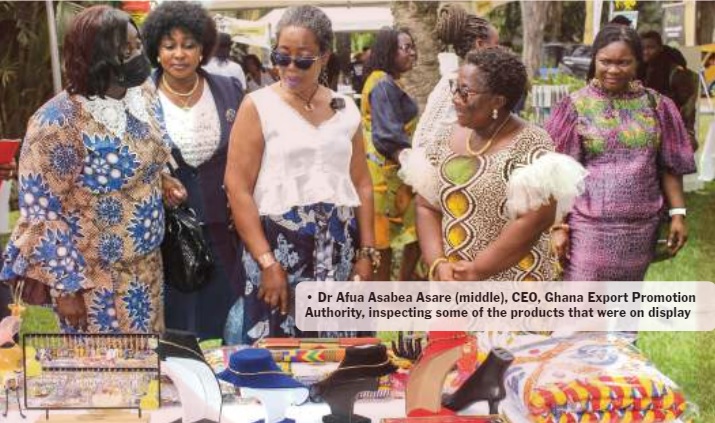 Women Icons, a series of regional exhibitions of women-owned businesses, was launched in Accra last Thursday on the theme: Recognising Iconic Women for economic Development.

Being organised by the Ghana Export Promotion Authority (GEPA), in collaboration with Access Bank, the three-day event aims at celebrating women for their role in business and national development by providing a platform for them to showcase their products and services which are locally made.

The programme was used to honour some women, both dead and alive, for the various roles they played in the country’s development.

For this maiden edition in the Greater Accra Region, the late Rebecca Naa Dedei Aryeetey, better known as Dedei Ashikinshan, an influential leader of the Market Mammies (mothers) Association, was honoured for the role she played in the independence struggle of the country and her business acumen.

As a queen of the flour business in Accra, she campaigned for and funded Dr Kwame Nkrumah, Ghana’s first President, to win the Accra Central seat, which was the pivot of his win.

In a speech read on her behalf to launch the exhibitions, the Chief Executive Officer of the and Drugs Authority, Mrs Delese Mimi Darko, said while it might be much easier to purchase our needs from foreign markets to solve a deficit, the real heroes were those who consistently searched, designed, innovated and carefully produced items locally with the premium made-in-Ghana seal.

She said data from the GEPA indicated that 312 women-owned businesses signed up for the She Trades Commonwealth project (an initiative  which provides technical assistance for gender-responsive policy reforms to ensure that all genders benefit equally from trade), noting that the number spoke volumes about the programme which had been run for just three years.

Mrs Darko said the FDA’s progressive licensing scheme since inception in 2020 had supported 1,511 micro, small and medium-scale enterprises, with 80 per cent of those supported being women-owned businesses.

In her welcome address, the CEO of GEPA, Dr Afua Asabea Asare, said she believed that with the roles women had been playing to cater for their families and in businesses no matter how small, she believed that they were already empowered.

She explained, however, that what women needed was support to expand, create more and develop to maximise their potential in order to play an enhanced role of driving the economy.

Dr Asare mentioned incentives, larger markets, more exports, access to credit and more patronage of their products as some of the ways to help women in that direction.

She said the exhibitions would be held in every region through out the country in order to achieve the said objectives, improve networking and provide more business opportunities.

In her speech, Mrs Francesca Opoku, the CEO of Solution Oasis, said Ghanaian women were known to be extremely hardworking and buttressed that assertion with the Mastercard Index of Women Entrepreneurs released in 2020 which ranked Ghana first in the world for the number of business women.

She said even though there were women in the country who had made a mark as icons in leadership and industry, most Ghanaians would often recognise their mothers and foreigners as their role models.

Mrs Opoku said there was the need to also mention Ghanaian women such as Esther Ocloo, Elizabeth Villars and Kate Quartey Papafio since they were closer to home and easier to identify with.

Exhibitors at the fair had products and services such as home decor, food, clothing and textiles, cosmetics, jewellery and ceramics.