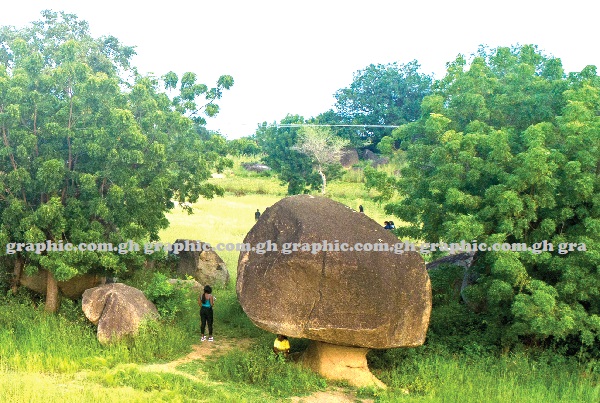 A mushroom rock, also called rock pedestal or a pedestal rock, is a naturally occurring rock the shape of which, as the name implies, resembles a mushroom.

These unique rocks are formed in a number of different ways: by erosion and weathering, glacial action, or from a sudden disturbance.

In Ghana, the Mushroom Rock — a natural occurrence — is located at Wuling in the Jirapa municipality in the Upper West Region. The structure standing at a height of about 2.2 metres is shaped like a giant mushroom or an umbrella.

It is surrounded by a number of caves that were used as hiding places during the infamous slave raid by Samouri Touri and Babatu, the notorious slave raiders from the Republic of Niger, between the 16th and 17th centuries when they were spreading their empires from the west of the then Brong Ahafo and the northern territories.

The caves are believed to be sacred structures that accommodate some spirits such as dwarfs and are, therefore, used for religious purposes.

To access the caves, one has to pass through narrow passageways on both sides to the chambers.

Visitors to the site can also be thrilled to some fascinating tunes by hitting chipping stones against the structures.