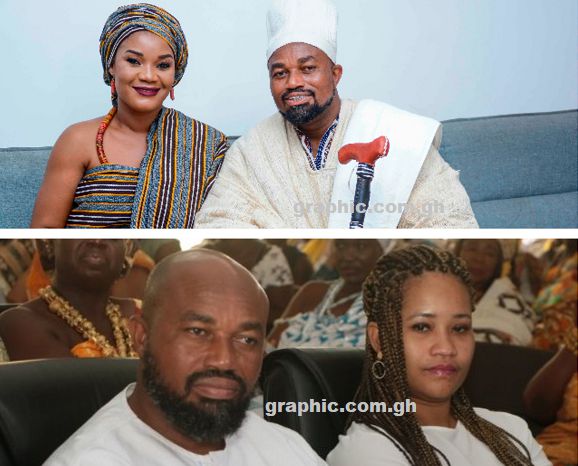 McDan with his two wives. Abigail is pictured in the top image and Roberta is below. Follow @Graphicgh

Ghanaian businessman, Mr Daniel McKorley is challenging the perception that men from the Greater Accra region are not romantic.

According to the Chief Executive Officer (CEO) of the McDan Group of Companies, although he is a polygamist he is very romantic to his two wives.

In a video teasing his autobiography — “The Path of an Eagle – Despair, Hope and Glory,” McDan who is also the Board Chairman of the Ghana Trade Fair Company Limited shed light on his love life.

"A lot of people think that Ga men are not romantic, if you read this book you will see how romantic I have been to both my wives.

"I adore them, I don't know that they made me romantic or I made them romantic but in all, I think I am a very romantic and passionate man about love".

In an interview with Metro TV in 2020, Mr McKorley said he married two wives because he wanted to have a large family.

He revealed that the women live in separate houses and his first wife accepted his decision to take a second wife.

He also advised men not to marry two wives if they do not have the means to take care of them.

"Yes it is expensive (to have two wives), it is very expensive. Don't try if you don't have money, you must be prepared", he said.

He explained that both wives have to be kept "sweet" and happy, adding that at times he makes thrice the payments of a man with only one wife.

He said he did not recall the last time he argued with any of his wives because they are ladies.

"I haven't argued with any of my wives for a very long time, we don't fight. It's not really money, I mean they are ladies both are very composed, well educated, and matured...," he said.

According to him, when it comes to choosing vehicles, Abigail prefers Range Rovers and Roberta likes Porsches.