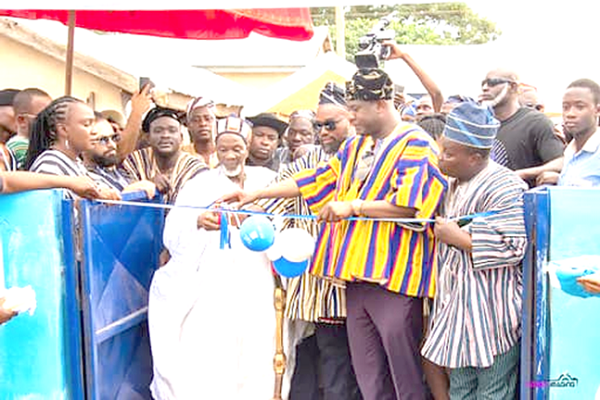 Ya-Na Abukari II (arrowed), the Overlord of Dagbon, being assisted by Dr Mckorley , Executive Chairman of McDan Group of Companies ( 3rd from right), and Alhaji Farouk Aliu Mahama, MP for Yendi, to cut the tape to inaugurate the school

A GH¢1.2 million school block built for the chiefs and people of Yendi by the Executive Chairman of McDan Group of Companies, Dr Daniel McKorley, through the McDan Foundation, has been inaugurated.

The new school block for the Rhema International School, a public basic school in the Yendi Municipality of the Northern Region, is to replace an old dilapidated classroom block, which is no more fit for purpose.

It consists of six classrooms, an office, staff common room, library and washrooms to provide a safe teaching and learning environment for the school.

The inauguration of the school block formed part of activities of a four-day working visit by Dr McKorley, who is also the Gugba Naa of Tamale. 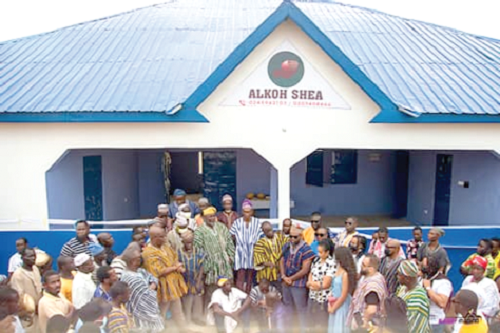 Speaking at the inauguration ceremony at Yendi last Saturday, Dr McKorley, who is the founder of the McDan Foundation, said the gesture was part of series of projects initiated in 2019 to touch the lives of individuals, institutions and communities in the northern part of the country and pledged to continue with his support in the north.

Dr McKorley appealed to management of the school and the assembly to take proper care of the facility to extend its life span and enable it to serve its intended purpose.

He encouraged the pupils and students to study hard to enable them to achieve their dreams and become responsible citizens of the country in the future.

The Overlord of Dagbon, Ya-Na Abukari II, who joined Dr McKorley to cut the tape to inaugurate the school block, commended him for the gesture and said it would go a long way to improve the quality of education in the area.

The Member of Parliament (MP) for Yendi, Alhaji Farouk Aliu Mahama, also thanked Dr McKorley for the gesture and appealed to other philanthropists and non-governmental organisations to come to their aid.

After the inauguration of the school block, Dr McKorley joined the chiefs and people of Yendi last Sunday to celebrate this year’s Damba festival, where he was also honoured with a citation for his good works.

During the visit, Dr McKorley also inaugurated the Alkoh shea processing factory at Nasia in the West Mamprusi Municipality in the North East Region.

The shea factory is part of the prize for the winner of the season for one of the McDan Entrepreneurship Challenge, Mr Alhassan Koligu Hamza, aside from the cash prize of $100,000 he won.

He later handed over a truck to Mr Hamza, who is also the Chief Executive Officer (CEO) of the Alkoh shea processing factory, to aid him in the collection and transportation of shea to the factory for processing.

Dr McKorley, in a brief remark during the inauguration of the shea processing centre, said he was moved by the statement of Mr Hamza during the competition to support women shea collectors and processors in his community, hence his decision to construct the shea processing factory for him in addition to the $100,000 prize money he won.

Mr Hamza said the factory currently engaged 400 women who were into shea collection and processing and provided employment for about 100 youth in the area.

The Chief of Nasia, Mazurana Abdulai Mahami, thanked Dr McKorley for the gesture that had created employment for several women and youth in the community.

In collaboration with Herpol Africa, Dr McKorley, through the McDan Foundation, also organised a free general health screening for over 1,000 widows from Savelugu, Yendi, Tolon, Gushegu, Nanton and Mion at the Jubilee Park in Tamale, where he also presented gift boxes stocked with food items such as rice, cooking oil, tomato paste, among others, to the women.

He also pledged to take care of their medication, especially those who had serious complications, saying that the health screening would be an annual one since he had taken it upon himself to take care of the widows, as women were at the centre of the Foundation.

At the beginning of his working visit to Tamale from October 21 to 24, Dr McKorley paid a courtesy call on the Northern Regional Minister, Alhaji Shani Alhassan Shaibu, at his office at the Regional Coordinating Council (RCC).

The regional minister expressed his appreciation to Dr McKorley for his contributions to the development of the region, that were also geared towards women and youth empowerment.