Efeee Noko, others excite fans at Our Music Festival 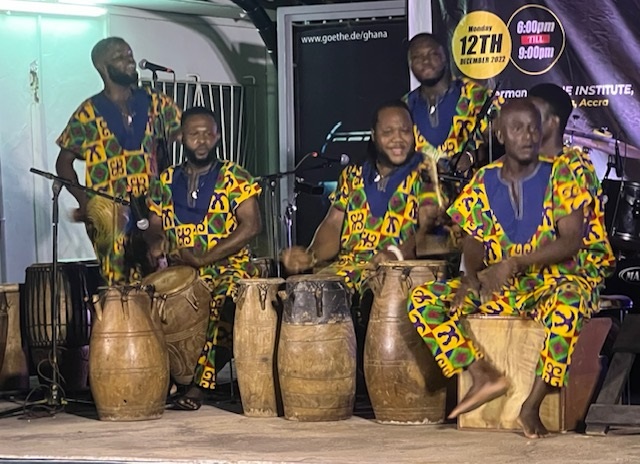 It was a strong indication of its determination to be counted as one of the nation’s major entertainment events in December when the second edition of the Our Music Festival came off on December 12 at the Goethe-Institut, Cantonments in Accra.

A fairly large number of lovers of home-grown Ghanaian music turned up for the programme which they embraced as the launch pad into their Christmas and New Year activities. The atmosphere was lively as one act after the other displayed several charming elements about made-in-Ghana music.

Pat Thomas, KK Kabobo, Akablay and his Abiza Band, Ekow Alabi Savage, Aryee Brown and the Makcabo Band and the Efeee Noko Traditional Band were all on hand with different shades of rhythms, but all sourced from this country.

Richmond Laryea’s Efeee Noko outfit was the first on stage, with their burst of traditional drums and energetic dancing. It was a welcome performance that thrilled those who already knew them and also won over new fans.

Laryea’s versatility as a drummer was in full glare with him coaxing a wide range of rhythms from the assortment of drums he tackled. The group’s repertoire embraced sounds from different parts of Ghana and beyond, which aptly fitted into the festival’s aim of showcasing the rich musical resources that abound in this part of the world.

“We wanted to be part of the festival at its inception in 2021 but we couldn’t get on the bill. Luckily, we were called for the 2022 edition and we were keen to put up our best. We did not want to disappoint the organisers and we knew it was a wonderful opportunity to let more people into our approach to Ghanaian and African traditional music,” Laryea said after the show.

One of the show’s organisers, Ekow Alabi Savage, stated that he was happy to attract the band to perform. To him, it was appropriate for a such a group to set the tone for the evening because all the different forms of contemporary Ghanaian music derive some energy from the traditional base.

The good vibes continued to flow with Pat Thomas and the rest dishing out vintage Highlife and other strands of popular sounds as the night wore on.

Well-known reggae man, Rocky Dawuni, was among the audience. He said the way forward for African artistes was to integrate the best from their roots with the contemporary trends to help them attract global listeners.

There were solidarity messages from the Ministry for Tourism, Arts and Culture and the United Nations Educational, Scientific and Cultural Organisation (UNESCO) for the festival.