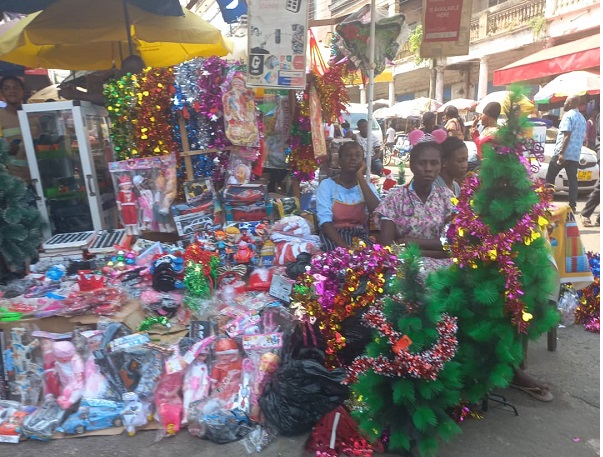 The normal signs of joy and merrymaking around this time of Christmas are missing in Wa, the Upper West Regional capital.

The Mirror took a tour around the Wa township and the usual hustle and bustle which normally greets the festive season in the years gone by was missing. Christmas tunes are not being heard over the airwaves and the fireworks which liven the nights are silent.

Prices of goods
The prices of goods and services have gone very high. For instance, the local gin, popularly known as ‘akpeteshie’, has jumped from GH¢1.00 per ‘tot’ to GH¢2.00.

The prices of products such as rice, vegetable oil, groundnuts, tomatoes, onions, spices and basic foodstuff, including yams and plantain, are also very high.

Enquiries at the Fadama market in Wa where people usually go to buy meat products revealed that goats were being sold between GH¢140.00 and GH¢1,000 depending on their sizes, while the price of guinea fowl had gone up from GH¢50.00 to GH¢70.00. To the average person, Christmas this year is on the low side.

Some managers of local pubs who spoke to The Mirror said they were putting their acts together to ensure they provided revellers with exciting Christmas and New Year programmes.

At the Bugatti Black Friday located at the Wa SSNIT Flats, the Manager, Jackson Hamid, gave an assurance that no matter the prevailing economic situation, they were ready to welcome the people.

“As of now, we have beautifully decorated the pub and various food joints as an invitation to the public. Besides, the Upper West Regional Police Regimental Band will be in action on Boxing Day, December 26, to perform for the public,” he said.

At the State Transport Corporation (STC) View Annex, the Manager, Godfred Osei Agyeman, said he was gearing up to participate in the festive season. He assured the people of delicious pepper soup, kebab, grilled tilapia and guinea fowls.

The youth were also gearing up to participate in the jam sessions being advertised by the various spots.

Church activities will be held in all the churches as usual, especially as the Christmas Day this year falls on Sunday.

Besides all these, the Ghana Health Service (GHS) has cautioned the public to consider the observance of the COVID-19 protocols since the pandemic is still with us. They are recommending the use of face masks in churches and observance of social distancing in public places.

The police have also advised the public to be security conscious since crimes are bound to happen during these times.

Although some vantage junctions in Ho were glittering at night with Christmas lights and other decorations, the usual Yuletide fever was largely absent among the populace, reports Alberto Mario Noretti, HO.

The streets were desolate and the usual crowd and queues at the various shopping centres were missing.

The Ho Central Market looked abandoned, with some of the traders dozing by their stalls. Some of the residents said they had shelved their Christmas shopping plans this year, citing the lack of funds and what they described as “killer” prices of cooking oil, rice and other items.

The Queen of Ho Central Market, Rejoice Norvixoxo, said shop owners in the market were struggling to keep their shops open due to the extremely low customer patronage.

Madam Norvixoxo, who is also the owner of Great Is Thy Faithfulness Shop in the market, said last year for instance, most of the shops attended to approximately 50 customers daily.

“This time, a daily average of less than 10 people buy from each shop in the market,” she revealed.

Dollar factor
The market queen said the recent decline of the US Dollar against the Ghana Cedi had not helped stabilise the prices of the goods purchased from wholesalers in Accra and Lome.

“Most of them are still maintaining the old exorbitant prices for goods such as pureed tomatoes, cooking oil and Christmas biscuits, and this is making matters difficult for the retailers,” she explained.

According to her, a box of Piccadilly biscuits which was sold for GH¢20 last year was now going for GH¢40, while ENA PA canned fish which was sold at GH¢7 was now on the shelves for GH¢20.

Meanwhile, vegetable sellers in the market have expressed similar lamentations, saying trading was even much better in the COVID-19 era.

A tomato seller, Victoria Atsutse, told this reporter that business was now a far departure from last year when trading was much more vigorous and profitable.

She said only an average of six people daily called at her stand to purchase tomatoes, unlike last year when 50 or more customers bought the vegetable from her daily.

According to her, the supply of tomatoes was constant from the Agotime-Ziope District and Togo, “but the problem now is we do not get customers to buy the stuff from us”.

Ms Atsutse said last year, traders in the market bought tomatoes from suppliers at GH¢150 per basket, but this year the price had rocketed to GH¢250.

Some drinking spots in the regional capital which have been playing Christmas jingles loudly in recent times to attract customers remain virtually empty for a better part of the day.

“We are not in normal times; the prices of goods are going up every day but our salaries are still the same, and so Christmas does not come to mind any longer,” said one public servant.

Another public servant was of the view that Christmas was only meant to remember the birth of the saviour of all mankind and for that matter, extravagant shopping for feasting on the day was not necessary, especially in times of stifling financial conditions.

Kumasi, the regional capital of the Ashanti Region, is preparing itself for the Christmas festivities, reports Kwadwo Baffoe Donkor, KUMASI.

Gradually, both the human and vehicular traffic jams have started and those who will be travelling to their hometowns have started thronging the various lorry stations in the city.

As usual, those who deal in seasonal items such as biscuits, drinks and other confectionary have turned the pedestrian walkways into stalls to display their wares.

Chief among the items on display are Christmas lights and trees.

Foodstuff vendors have joined the fray and virtually reduced the two-lane roads in and around the Kejetia Central Market into single lanes.

While the drivers meander through the centre, pedestrians and vendors struggle over the rest of the space for the right of passage and space to sell.

Some had parked on the street to sell their wares from their car booths.

Security
The Regional Security Coordinating Council has, with the support of other security services, deployed uniformed policemen and fire personnel to ensure security at vantage points within the metropolis.

Fire tenders had also been placed at some of the markets within the metropolis to respond timeously to any fire incident.

According to the Regional Minister, Simon Osei-Mensah, often around this time, some of the markets experienced fire incidents, hence the measures were to help reduce the effects of such occurrences to save lives and properties.

Events
A host of events have also been lined up by event organisers to keep families busy and entertained throughout the festive period.

The Rattray Park will be the busiest event grounds in the city as a host of events have lined up to be held there.

From December 24 to 25, the park will host parties for children, and on Boxing Day, December 26, 2022, Amakye Dede and friends will entertain patrons to some good old highlife songs.

On December 27, 2022, the Kumasi Archdiocese of the Catholic Church will also create an environment for families to enjoy the festivities as a community at the Christian Village at Apire.

The action returns on January 2, 2023 to Rattray Park, this time with a family party.

Other event centres such as Sapphire Gardens will be having a live band on December 26, while the Basement Night Club at the Kumasi City Mall will be on fire every Friday night.