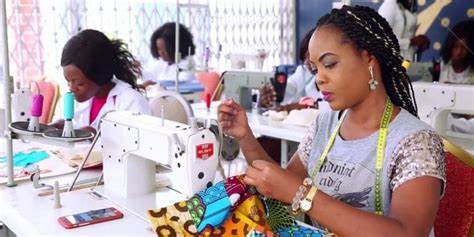 It is a few days to Christmas but most tailors and hairdressers are not getting business as it was in the past.

Usually around this period, tailors are always extremely busy as they have to stay up into the night to sew clothes for their clients for church services, parties, weddings and other events associated with the Christmas festivities.

Unfortunately, due to the current economic situation, most of them are out of business. The long queues at the braiding salons are non existent. The Mirror visited some tailoring shops and salons to find out about the patronage of business in various suburbs of Accra.

In an interview with a fashion designer and owner of Mapam Fashion at Ashiyie, Ophelia Darko, 27, she said “this year’s Christmas is slow. I mean, Christmas is just next week but I have just five orders all from one bride. Everyone is feeling the heat of the economy, when you charge they complain. Some say they will wear last year’s attire”.

The owner of Zasher Couture at Ashaiman, Marvin Young, who sews for men and on a large scale told The Mirror that even though the economy was bad, people could not say they would not go to church or parties.

“I have had about 15 orders so far, but mostly for children. The previous years were definitely more but I have designed some kaftans also for some wedding guests and groomsmen this Christmas. Orders are slow but at least, I won’t go to bed hungry”.

International hairstylist of Hair Guru Studio, Seth Yankson, said he often travelled to South Africa, Dubai, Liberia, Tanzania among other places to work. “Business is not bad. My clients are financially endowed women who are willing to pay for my worth. This Christmas I still have bridal styling orders, not as much as last year though. I believe people want value for money, so if you are good and work on a large scale, you can get a lot of orders despite the current economy,” he stated.

The owner of Fear God Salon at Adentan, Mavis Aziawo, lamented that business was slow. “Are we even in the Christmas season? Because I am not feeling it. All the plans I had for my salon this year have been shattered due to minimum work. As you can see, my shop has been empty since morning”.

Interestingly, some of the beauticians who were approached were reluctant to grant an interview due to the frustration in the system.

For instance, one of the hairdressers by name Nana Abena asked The Mirror team to leave and not disturb her unless they were prepared to give her some money. According to her, she had some home service job to attend to and might lose money if she kept talking.

The Mirror spoke to some ladies regarding their hair and fashion plans for the Christmas season. They all complained about lack of money.

Sarfoa Amankwah indicated that she had no plans for her hair and would wear an old wig cap for any event she felt like attending. However, she would sew kaba and slit for church service.

Memunatu Mohammed said the economy could not stop her shine. With some bridesmaid’s duties underway, she already had some clothes with her tailor and planned to fix her nails and style her hair.