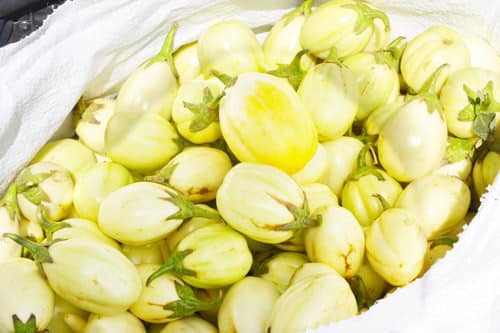 Vegetable farmers, particularly those into garden eggs farming, are alleged to be using powdered detergent to spray their vegetables to make them look fresh and whitish.

The practice is alleged to have been encouraged by market women who prefer the white looking egg plant to the greenish or yellowish one, thus compelling the farmers to be engaging in the practice.

A farmer based at Offinso, Yaw Nkrumah, told The Mirror that the practice was widespread, particularly in the Akomadan and Offinso areas in the Ashanti Region where these vegetables were mostly produced.

He attributed the practice to lack of education among the farmers and believed that if they were educated, they would know the health implications of the practice and stop it.

Mr Nkrumah disclosed this in an interview during the close-out ceremony of  Hortifresh West Africa, a programme sponsored by the Embassy of the Kingdom of the Netherlands to support stakeholders within the fruit and vegetable value chain  meet the increasing demands of the market.

Mr Nkrumah appealed to the educated to get involved in agriculture to produce wholesome foods for the market “else you will continue to eat ‘poison”.

According to him, there was the need to build the capacity of the farmers and to educate them on good agronomic practices such that they would stop doing the bad things that would at the end of the day, endanger the lives of the consumers.

He said most of the farmers indulged in the practice due to ignorance and believed that if they were educated, they would be in a better position to explain to the market women why they would not be able to get their produce to look as whitish as they wished.

He said if the consuming public were also aware of the quality of the product they were consuming, they would be selective in their demands.

He said farming was a very lucrative venture and encouraged the youth, particularly the educated to go into farming and help save lives.

According to him, though he was into the sale of agrochemicals and building materials as well, “it was through cabbage farming that I got the funding to expand into other sectors”.

He said there was no way a cabbage farmer in Ghana would run at a loss “because the returns on investment is more than 100 per cent”.

Recently, he said there was a glut in cabbage such that the price reduced from GHC350.00 per bag to GHC80.00 “even that, I did not incur any debt but still made profit on my investment”.

Mr Nkrumah said the programme was building their capacity and also linking them to service providers and markets that had enabled them to expand their businesses.

He said even though there was no financial support of the programme, “the knowledge acquired and the network I have built during the period has really helped my business. But for this programme, there were people I met who I would not have had the chance to meet”.