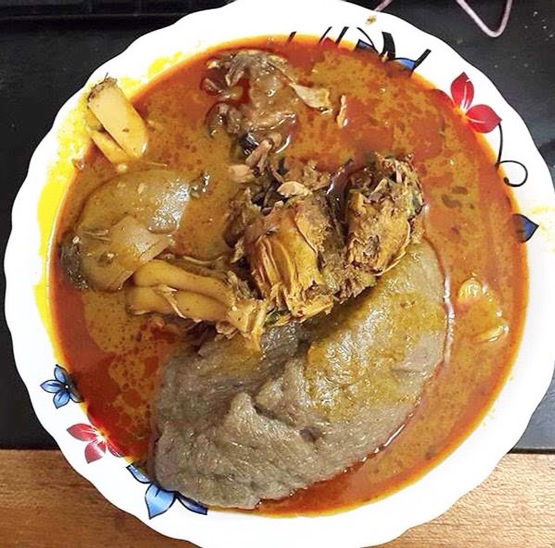 Kokonte, a staple on the Ghanaian chop bar menu appears to be the favourite of many.

Some chop bar operators in Accra The Mirror spoke to on Thursday to commemorate World Food Day said although customers would say Kokonte was not their favourite, it had consistently become the first on the menu to finish.

Kokonte has a well-known nickname – “face the wall” and is also called “abetseɛ” by Akans.

The latest additional nickname we found was “blackpool”.

The dish, hitherto considered as “too local” and for people in the rural areas has become popular in the cities and patrons do not “need to face the wall” as they order and eat without looking over their shoulders.

Processing
Kokonte is processed mainly from dry cassava and, sometimes, from dry plantain, and, is enjoyed best with either okro soup, groundnut soup, palm nut soup or grinded pepper spiced with dry fish.

The interaction was also aimed at finding out the kind of dishes customers of chop bars loved.

Aside kokonte, banku, fufu and noodles were also well patronised.

Theme
This year’s World Food Day with the theme: “Our actions are our future – better production, better nutrition, a better environment and a better life” was aimed at bringing together governments, businesses, non-governmental organisations (NGOs), the media and the general public to promote worldwide awareness of ensuring healthy diets for all.

Traders
Some traders at the Central Business District, Agbogbloshie and Adabraka markets in Accra said kokonte powder sells faster than any other food powder in the markets.

According to them, not only was the powder cheaper, but they believed the staple was nutritious and healthy.

“I sell kokonte powder more than any other powder here. Some workers even call me to order so that by the time they get here, it is ready for pick up” Auntie Ayisha, a trader at the Adabraka Market told The Mirror.

Chop bars
At God’s Time Chop Bar at Odorkor in Accra, Madam Vida Achiaa, said she could sell four large metal pots of kokonte with soup on a very good day, adding that, “people even place orders before I start preparation. Kokonte is the cash cow of this bar and it is the first meal to finish here.”

Food attendants at a popular kokonte joint behind the Adabraka Mosque also in Accra, called “Non-stop”, said "It is a very profitable dish. It sells faster and on a good day, we sell more than five pots (dadesen) especially in the afternoon and sales build up in the evening from 6 p.m. to 9 p.m.”

At Circle Neoplan Station, some long distance drivers explained with excitement that it was their go-to-meal before their trips.

Agya Amissah, a driver from Accra to Obuasi said “l usually like to have it with light soup, fish and a little okro. That way, l am able to travel far without the need to stop en route to eat.”

Auntie Ataa, a food operator at the Neoplan Station remarked: “that is the meal they all want. “Face the wall", it is the first to finish here. I buy 30 olonka of kokonte powder for the first pot, 15 for the second pot and 20 for the third pot to cover the day. Sometimes, I add a fourth pot and each one of them gets finished yet fufu or kenkey will be available.”

A dispatch rider, Mr Courage Asem said, “kokonte finishes early. If you delay, by the time you get to some of the chop bars, it is finished.”

Spotted at Mataheko in Accra, Nkunim Chop Bar also corroborated that although their main meal was fufu, they had not regretted adding kokonte, saying by 10 a.m., the staple was sold out.

The story was no different from that of what a food hawker, Madam Dufie at the Odawna Taxi rank told this reporter.

She said she used to hawk Tuo Zafi (TZ), but switched to kokonte when she realised it sold faster.

She said “mfaso) wo mu” to wit, it is a profitable business. Usually by the time I get to the market, my kokonte is already finished. But there is always some left over TZ. So I decided to go in fully and it has been good.”

In a phone interview with Super Foods Bar at Santasi-Anyinam in Kumasi, the operator who is a graduate of the Ghana Institute of Journalism, Ms Ohemaa Saah Dwapong, said she started the business as a fried rice joint but in 2019, she realised the need to tap into the business prospects of kokonte and added that by 11a.m., she was done selling.