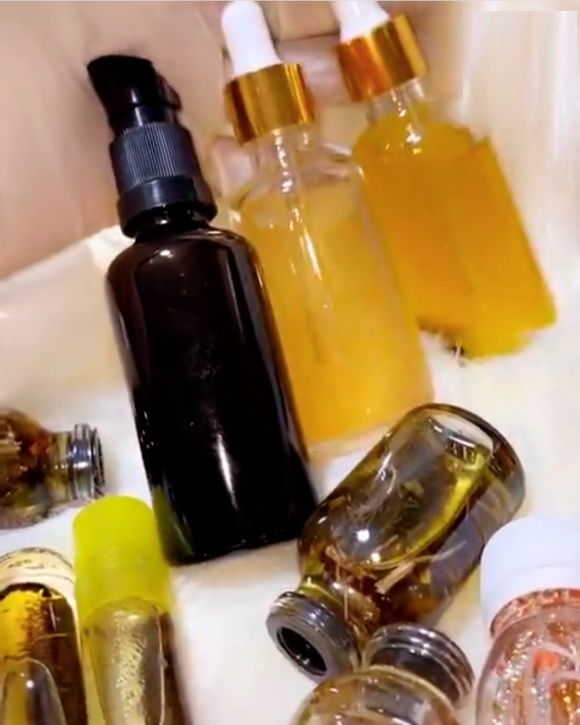 The use of “attraction perfumes” as charms by some women to entice men, especially wealthy ones into romantic relationships seems to be trending.

It is said to be common practice among “side chicks”.

This has motivated the search and sale on what some customers on social media describe as “pacified perfume”, claiming to attract men to its users.

Some of the users who spoke to The Mirror on grounds of anonymity were emphatic that their victims got “hooked onto them forever” when they wore the perfume.

Effective results
For effective results, vendors of such products constantly remind their potential customers in their adverts online not to use the product and stay at home but go to where rich men could be located.

Interestingly, when customers bring feedback that the perfume did not work, these vendors get angry on social media blaming them for not going “where the rich men are”.

An alternative to the perfumes suggested in certain posts were waist beads, necklaces and rings.

They are claimed to entice men of substance.

There are users who get their ‘attraction’ products in the form of a white powder from their pastors, testifying that anytime they used the powder on their face, men followed them.

In addition, there are those who prefer a higher potency of these products called “chase gold perfume”.

The Mirror’s monitoring identified “chase gold perfume” as a ‘hit’, which users believed had the potency to create a mad rush of men to a user.

Some users of “chase gold perfume” claimed to enjoy unmerited favour and generosity in different ways, particularly the constant flow of money and surprises from their men.

Each strand of attraction waist beads goes for GH¢50.

However, a potential customer could get the “attraction perfume” at a lesser cost of GH¢30 in some of the spiritual items shops at Tudu in Accra.

Instructions
According to those who traded in them and users, “the attraction perfume works like magic.

It is a kind of “flirting perfume” that is very good for women who mean business”.

Some vendors of the perfume told The Mirror that users were always expected to strictly follow instructions and conditions.

For one of the vendor’s known as Ohemaa, “the perfume may lose its potency once shared. You need patience when you start using it because it works gradually and can be combined with chase gold perfume”.

Some waistbead charms sealed in containers

In the past, men were known to chase women with some spiritual help dubbed “for girls”, however, these days, some women have jumped onto the cruise.

Nima Market Mosque
Spotted at the Nima Market Mosque in Accra on Wednesday, Mallam Farouk, who ushered The Mirror into his home explained that perfumes could do wonders for a woman in a relationship.

He said such perfumes had been in existence for centuries only that some women had now started using it.

“It is good for both men and women; it works perfectly well depending on the prowess of the person who did prayers on them,” he said.

According to the mallam, the special perfumes was sold around the mosques.

He said users attracted good people including individuals who were willing to invest in their lives.

“But for it to be effective, l suggest you visit a spiritual person who knows his craft on a personal encounter. Where you make some commitment in terms of money. You give from your heart for him to use as a seed to say prayers. Then he will do ‘salega’ for you. Those who are into this use two black male doves and a white female dove for cleansing in addition to prayers before they dispatch for sale. But when it is one on one, the cleansing is for only you”.

Another mallam, Baba Sherif, posited that among the mythical and amazing wonders that “attraction perfumes” performed was improving sales.

He explained that the “attraction perfumes” were not any magic or charm, its manifestation was simply backed by prayers.

He said “It has always been there. The sudden craze is because it has become easily accessible due to social media. Also most people are buying to increase sales because they can do it such that you can hang it in your shop”.

A sales person at Abrewa Nana Herbal and Spiritual Centre in Kumasi, told The Mirror in a phone interview that, their attraction ring was so powerful that in the event where the user was about to be involved in a road accident, the ring changed its colour to black.

That, she said “in such circumstance, was important for the user to quickly dial our numbers for a luck direction to survive the accident”.

“Although our rings may look like some of the rings on the market, it is backed by special angelic prayers and that make it different from those around. We use seven days to fortify all the rings for sale”, she explained.

Users
However, in an interaction with some users of these attraction products, there were varied responses: Some claimed they did not work for them while others believed that “it worked like magic”, there were those who were indifferent.

For instance, Dorcas, a journalist, said the only response she got from its usage was people telling her that she smelled good.

“It is always men telling me l smell good. I think buying such products is just a waste of money,” She said with laughter.

Dillys Ahenkrah told The Mirror that “since l started using the perfume, men give me money as if they didn’t work for it”.

However, for Adowaa, she first got the attraction powder at a church at Alajo, Ebony junction in Accra, “after every Wednesday church service, the pastor will tell the ladies to form a queue for it. He will specifically let them know that it was not for married women. The powder is crazy, anytime l use it and I am on the streets, men will park and will be smiling for my contacts”.