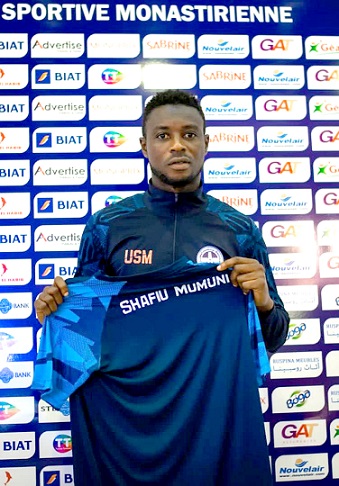 Tunisian top-flight side US Monastir has officially announced the signing of Ghanaian striker Shafiu Mumuni on a two-year deal.

Mumuni was unveiled last Saturday after completing all other details of his transfer with the Tunisia side.

The 25-year-old was skipper of the Black Star B team at the 2019 WAFU Cup of Nations in Senegal and the top scorer of the tournament, having scored four goals in total.

Before joining Monastir, Mumuni was reported to have been contacted by Ghana Premier League giants, Kumasi Asante Kotoko and Accra Hearts of Oak.

However, both clubs failed to meet his demands, forcing him to move to Tunisia.

Shafiu also saw deals from Romanian side CFR Cluj, a Spanish side, and Greek Super League outfit Apollon Smirnis but those deals failed to materialise due to the coronavirus pandemic.

He is expected to take the Tunisian League by storm, having impressed in Ghana and continental competitions respectively.

Shafiu rose to prominence at the 2019 WAFU Cup of Nations in Senegal, where he hit the first ever hat-trick against Cote d’Ivoire in the semi-finals and netted four times to finish as the tournament's top scorer, aside impressive outings with Ashantigold in the CAF Confederation Cup last year.