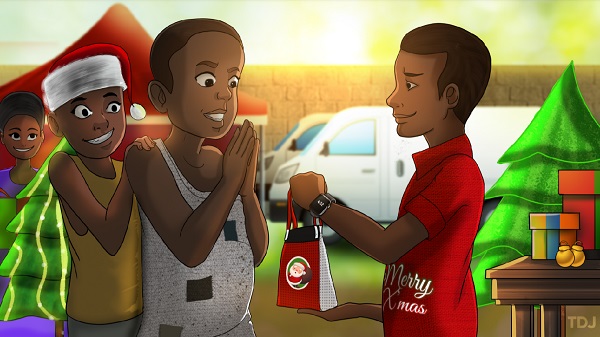 Kwadjo is fifteen years old. He has spent Christmas fourteen times excluding this year's. Over the past years, Christmas has been about gifts, travelling and parties. However, due to the Covid-19 pandemic, the mood of Christmas 2020 has been different.

Most people are concerned about their health, so they are staying safe by moving around less but others are being careless.

As a younger child, Kwadjo always counted each day in December starting from the 1st looking forward to the 25th. All because of the gifts, travel and parties that came along with it.

This year has been so different, the usual way of spending Christmas would have been a risk to the health of the public due to the outbreak of the very dangerous Covid-19. A simpler Christmas is what they called it. Kwadjo's mom always asked him three days before Christmas for things he wanted. He loved this question so much that even though he was born in March, he loved December more. The items Kwadjo would list would make his mom laugh and say, ‘’ My son, what you need is half a section of what’s in the mall”.

This had been the normal banter between Kwadjo and his mother for years. In spite of Covid-19 hanging over Christmas festivities, the 25th of December 2020 had been extraordinary for him, his family and some others.

For Christmas 2020, they planned on travelling around the country to see different tourist sites. Kwadjo has always been a proud Ghanaian and insisted on visiting tourist sites mostly in his country. However, on Christmas Morning of 2020, he woke up with that dream being shattered because of the pandemic.

"Dear God, please have Santa bring for us all, the gift of healing." he prayed.

After praying, as he was about to race downstairs to catch a glimpse of his Christmas presents, whether nineteen or twenty gifts, a thought hit his mind.

"Christmas has always been about me and the presents I receive. Christmas in general is all about happiness, yes." he agreed with himself.

"But should Christmas be about only my happiness? No." he answered himself.

Realising he was conversing with himself, his thoughts continued.

"Christmas shouldn’t be self-centred. It’s about love, compassion, care and giving. Care and compassion don't need to be expressed only at Christmas. It needs to be shown every day, just highlighted at Christmas", he thought to himself.

“Kwadjo!" I heard my father call out. "Won’t you come and see what we got for you this year? Kwadjo, I got the Rolex watch you wanted with a few other gadgets."

Next to him, I asked back "How much is the Rolex watch? "

"It's only a few hundred cedis." Dad responded.

Not wanting to blow my mind, I asked again.

"How much food could have been bought with that money?"

"Dad, I want this year’s Christmas to be the real Christmas."

Not really knowing what that meant and where it came from, but I felt a spark in me that urged me to push forward.

"I want us to present the kids on the street who are less privileged with food and gifts. "

"My son do you know how many street kids are out there?" Dad laughed and asked.

I shot back, ‘’Do you know how many kids wrote to Santa?’’

He replied, "Santa is not real.”

Exactly!" I said. "Santa is not real but you are. You can make a little effort and it will make a great difference! Stories over the past years have been centred on how Santa shared gifts, well, this year, I’m Ghana’s new Santa!" Knowing how dumb I sounded.

Kwadjo's father bought into the idea. He and his parents went out and ordered for a lot of food, drinks, gifts and other fun party items for children. They set off to a less privileged neighbourhood not far from theirs to share them. Before they began sharing, Kwadjo caught the eye of a girl who had no shoes on and asked her how she spent her Christmas each year.

She responded “To me, Christmas doesn’t exist, I have to beg people each and every day in order to get some food to eat. I sleep at the same spot whether rain or shine, Christmas day is really no different."

This made Kwadjo sad. He thought, “It is a fact that I won’t be able to put a smile on every child’s face but at least the smiles we manage to get I pray will encourage others who are better off to also do something to bring a bit of joy to others."

Not too long after Kwadjo and his family began to share the food and items, a huge van came to park nearby. It was a food delivery van from a popular restaurant. They had seen what Kwadjo and his family were doing and decided to come and share as well. When they opened their van, the aroma of jollof rice and fried chicken was up in the air, taking over the nostrils of everyone in the area. Immediately the children started to jump up and down, some running around shouting "Bronya aba oooo! Bronya aba doo ooo! "Christmas is here! Christmas is finally here!.

Kwadjo found the children's excitement both joyful and sad. He smiled and looked on as some rushed from the queue he was serving with his gift packs in the direction of the restaurant van. The smell of jollof and fried chicken was so good Kwadjo wanted to go for some as well, but he knew he must focus on his mission.

Within a space of two hours, lots of vans, mini trucks and saloon cars had come around with loads of stuff. An event organiser came with tent builders to put up several tents to shield people from the scorching sun. Kwadjo and his family as well as those others who cared, shared not just food, drinks, toys, face masks and hand sanitisers but also love.

Because of Kwadjo’s thoughtfulness, generosity and selflessness, many children and even some adults had their very first great Christmas!

From then on, they began to look forward to the happiness and love that comes along with the celebration of the birth of Jesus Christ. God gave his son as a gift to the world. Kwadjo understood that Christmas is all about giving and spreading love to everyone, whether you know them or not.