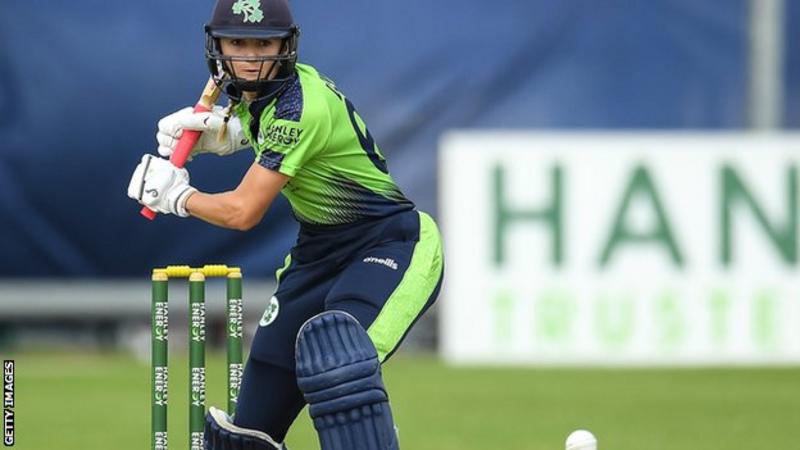 Gaby Lewis top-scored for Ireland in Abu Dhabi as they kept alive their hopes of qualifying for next year's T20 World Cup in South Africa
30.5k Shares

Ireland beat Scotland by 19 runs to reach the semi-finals of the T20 World Cup Qualifier as the Scots' hopes of reaching South Africa came to an end.

Arlene Kelly was impressive for the Irish as she bowled Lorna Jack in addition to running out Priyanaz Chatterji and taking the catch off Maguire's bowling which dismissed opener Saskia Horley.

In a contest played in extremely hot conditions, Lewis and Prendergast both hit rapid-fire half centuries in Ireland's solid batting performance.

After Irish skipper Laura Delany won the toss and elected to bat, Lewis showed her intent with three boundaries in the first over.
Amy Hunter's departure for only three in the fifth over proved a mere blip as Prendergast put on 62 for the second wicket with Lewis before the opener was trapped lbw by Abtaha Maqsood for 66.

Prendergast's sensational catch to dismiss Ailsa Lister left Scotland on 34-2 and when she took another at extra cover as Bryce departed, the Scots were in trouble at 109-6 and their lower order - despite a valiant effort - were unable to turn the match around.

With Bangladesh having topped Group A following their win over Ireland on Sunday, the Irish will face Zimbabwe in the semi-finals on Friday if the Africans, as expected, defeat hosts the United Arab Emirates later on Wednesday.

Zimbabwe lead Group B following the opening two series of matches with Thailand and Papua New Guinea involved in a battle for the other remaining semi-final spot.
The winning semi-finalists will be guaranteed places in South Africa but the losers of the last-four contests will miss out on qualification.