Wilhelmina Ayi, a fashion designer at 18 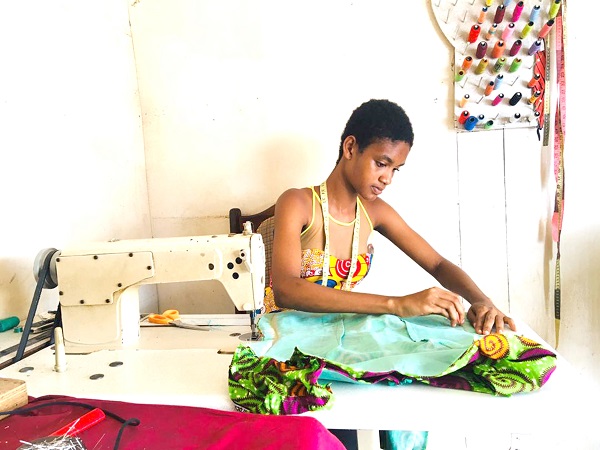 Wilhelmina who is also a photo model discovered her passion for fashion at the age of 10 when she was watching a fashion show on television with her dad.

Shortly after that, she started sketching clothing patterns off the cuff with no guidelines from anyone.
In an interview, Wilhelmina said she grew up among multi -talented friends who were dancers, singers and committed to their books and didn’t know her specialty.

“I was very horrible in other areas such as singing and dancing, while I was growing up,” she said.

Wilhelmina who is a Form Two Home Economics student at St Mary’s Senior High School at  Korle Gonno in Accra and specialises in clothing and textiles said she began sewing in form one when her Clothing and Textiles tutor advised them to take an internship during their vacation.

She went to a seamstress close to her house to begin her internship but was not engaged usefully on the job so she did not learn anything.

Determined as she was, she bought few fabrics and the next day,  took instructions from  one of her boss’s apprentices to sew a top.

The next day, she was able to sew a full dress.

“Anytime I sew a new dress, I take a picture and send it to my family and they encourage me. I can now sew different styles and have clients I sew for at a fee,” she told the Junior Graphic.

Upon completion of senior high school, she intends to attend Dreams College of Creative Arts to improve upon her skills in fashion designing.

As a photo model, she plans to bring together a team of girls to train them and set up a photo modelling agency called Povi Modelling Agency.

Wilhelmina started her primary education at Redeemer Academy at Tetegu in Accra and completed junior high school at Christian Home School in Dansoman where she won several academic awards in Religious and Moral Education and Creative Arts.

She said she was grateful that even though she had not won any awards, all designs she sets out to sew becomes a success. She receives more good remarks than negative.

Wilhelmina unveiled her designs during a fashion show held by her school to mark its 60th anniversary celebration.

She organised a photoshoot in August this year to exhibit her beautiful designs. This photoshoot, she said, gave her colleagues who aspired to be photo models the opportunity to also exhibit their talents.

“I have not gotten the opportunity to attend seminars or workshops.

Even though I haven’t had the opportunity to upgrade myself, I intend to participate in Vatz Runway, an upcoming fashion show where I will be a model and a fashion designer for the programme.”

Wilhelmina said her greatest challenge when she began sewing was her inability to concentrate on the other subjects except clothing and textiles.

“I admit that I have lost focus on the other subjects trying to pursue my dreams. It’s very difficult for me to learn other subjects.

I hope to manage my time well to concentrate on the other subjects,” she said.

Wilhelmina makes every effort to ignore unnecessary comments meant to discourage her and  is poised to become a good example for many in the fashion industry.

Wilhelmina said her greatest inspiration was her mother who had passed on.

“My mother was a unique and brave woman. Everywhere she went, she stood out. That’s how I want my brand to be.

Among thousands of designers, I want to stand out and be noticed for what I do,” she explained.

She added that her mentor, Dr Clement Asemnyera, who is the founder of Dreams College of Creative Arts, is also someone she looks up to in her fashion career.