We will bounce back strongly in future tourneys - Berko 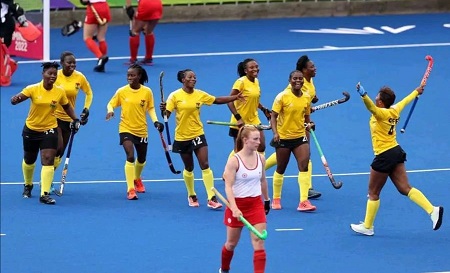 A stalwart defender of the national female hockey team, Mavis Boatemaa Berko, says despite their below average performance during the just ended Birmingham Commonwealth Games, the team is determined to bounce back strongly in future international tournaments and fly the flag of Ghana very high.

She said she was of the view that given the limited time that the national female hockey team trained prior to the tournament and the skills, techniques, and strategies they exhibited during the tournament, they showed much prominence, an indication that with the needed support and exposure, they could be highly competitive in future tournaments.

Describing their performance as a learning curve, she said with the proper facilities, exposure, and motivation, the team would rise to the occasion and become much more competitive in all international tournaments.

“We lost to our opponents in almost all the matches we played but, comparatively, we noticed that we have really improved upon our performance and our skills level, especially if we look back to the 2018 Commonwealth Games,” Ms Berko explained during an exclusive interview with the Junior Graphic.

Ms Berko, who scored three goals in the tournament, indicated that they lost to teams that were not only far ahead of Ghana in terms of the world ranking “but also have players who are full time professionals.”

“Their players are not only exposed to regular competitions at the highest level but also use quality facilities, equipment as well as a good diet to keep them in good shape, so they dedicate all their time to playing the game,” she said.

She observed: “Against Wales, for instance, we were able to match them in the first and second quarter, but they had a penalty corner in the third quarter which they utilised to break the deadlock, before scoring three goals in the last quarter due to bias officiating against us. In spite of our defeat, our performance was classic.”