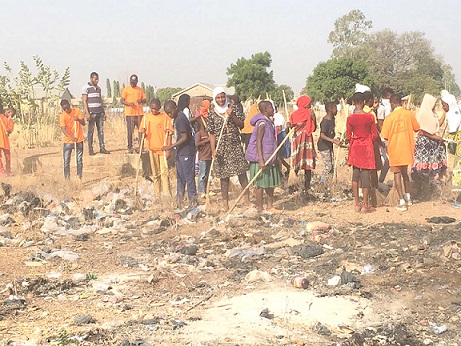 • The schoolchildren sweeping the community as part of the clean-up exercise. Follow @Graphicgh

A number of schoolchildren in Wa in the Upper West Region organised a peaceful demonstration on Saturday, March 6 to register their protest against the plastic waste menace that has engulfed the town.

The children aged between 10 and 17 years who are members of the Children for Clean and Healthy Communities project (A4CC) created the awareness and sensitised people to the importance of improved sanitation in the Wa township.

Among them were students of the Tender Care Preparatory, the Agdam International, Ancillia, Wa Model Basic Schools, Children’s Parliament, and Library Clubs, among others.

The children have observed that with the increase in population, plastic and other waste materials were being disposed of recklessly and indiscriminately and if nothing was done about it, the inhabitants would be exposed to diseases which could have been prevented.

Prior to the demonstration, the students had undertaken a massive clean-up exercise organised by Info Radio, a Wa-based commercial radio station.

The exercise was supported by THEIA International, a German-based non-governmental organisation (NGO).

The Chief Executive Officer of Info Radio, Mr Gabriel Mwini said if children are educated on the important role the environment plays in the lives of humans, they would see the need to protect it.

He said they would be knowledgeable enough to speak against acts that affect the environment negatively.