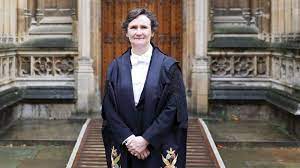 Oxford University's new vice-chancellor has championed humanities subjects after the Prime Minister said maths should be taught until 18-years-old.

Last week, Rishi Sunak said he wanted the UK to "reimagine its approach to numeracy" by making maths compulsory.

At her inaugural speech Professor Irene Tracey said she would "go further" to include humanities because children were being de-skilled "too early".

The Department for Education has been asked to comment.

Just half of 16 to 19-year-olds study maths, according to Mr Sunak - but this figure includes pupils doing science courses, and those who are already doing compulsory GCSE resits in college.

Speaking at her welcome ceremony at the university's Sheldonian Theatre last Tuesday, neuroscientist Prof Tracey said: "In this country we de-skill our schoolchildren too early with the great divide at 16 between science and humanities.

"In an increasingly data-driven world, all our students need competence and above all confidence in dealing with data, but the same goes for scientists dropping humanities too early.

Prof Tracey, a neuroscientist, was born in Oxford and attended Gosford Hill School in Kidlington.

She is the 273rd vice chancellor of the university.