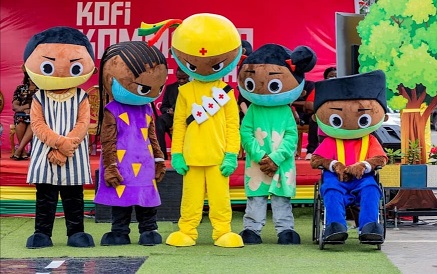 An animation series to educate children on the COVID-19 pandemic and other health-related issues has been launched at a ceremony in Accra.

The series known as the Kofi Kommando and Squad will also sensitise children to adopt healthy lifestyles, have good nutrition and improve their general well-being.

The series which was introduced by Mullen Lowe, a communications agency, in partnership with the Ghana Health Service (GHS) and the Ghana Education Service (GES) will inspire children to continue to observe the COVID-19 safety protocol to protect themselves against the disease and also build resilience against future pandemics.

It will teach children the various diseases and the ways they can adapt to live healthily.

The Minister of Information, Kojo Oppong Nkrumah, who launched the initiative, encouraged children to patronise the mini-series and apply what they learn to their daily lives.

He also charged parents to ensure their wards pay attention to the animation because they were based on Ghanaian culture such that every child can relate to it.

“What Disney churns out and other animations are not culturally sensitive and will not appeal to children everywhere in Ghana”, he explained.

An overview of Kofi Kommando and Squad

The Managing Director of Mullen Lowe, Mrs Norkor Duah, explained that the characters in the series were carefully selected to represent various ethnic groups in the country to appeal to every Ghanaian child.

“The characters in the series consist of two girls and three boys who have created content to teach youngsters healthy lifestyles such as regular washing of hands, eating healthy foods and having enough rest to safeguard them from diseases,” she said.

She added that the series has been designed to include children with special needs.

Mrs Duah explained further that if children were educated on health and societal issues, they would act as agents of change and strive to attain global goals.

“The series has also been designed with colourful cartoons that children between ages 6 to 16 can relate with and it will be telecast on various channels across Ghana”, she indicated.

For her part, the UNICEF Ghana representative, Anne Claire Dufay, said the initiative was timely because it would provide a platform for children to adopt healthy behaviours and contribute meaningfully to the fight against the spread of COVID-19 and other future pandemics.

She commended all stakeholders who introduced the series and urged them to engage everyone so as to make it successful.