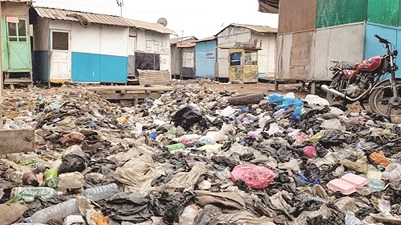 Dear Editor, I write to draw attention to a negative phenomenon in the country — the insanitary practices and its effects which are unbearable. As a citizen, I am really concerned about it.

One of the most common insanitary practices in the country is improper disposal of waste. Most people have cultivated the habit of throwing rubbish anywhere. People throw rubbish into water bodies, gutters and other unauthorised places. Rubbish thrown in water bodies pollute them. Rubbish thrown into gutters choke the gutters, which eventually results in floods. These gutters also serve as breeding grounds for mosquitoes which cause malaria.

In order to end the practice, I suggest that dustbins should be placed at vantage points. Sites should also be allocated purposely for the dumping of rubbish. Glass and plastics should be separated from other waste products and recycled. People should also do well to dispose off rubbish at the right places.

Open defecation is another insanitary practice that has become a nuisance in the country. Many people defecate in bushes, water bodies and other unauthorised places. To eradicate this problem, toilet facilities must be provided in these areas to prevent people from defecating openly.

It is my fervent hope that the necessary measures will be put in place to solve the insanitary practices in the country once and for all.