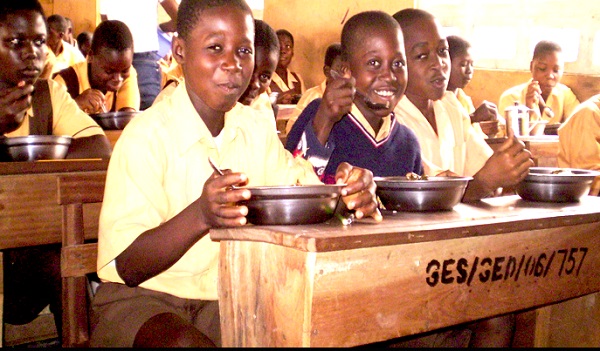 The hot meals provided by the government for Junior High School (JHS) students last term have been suspended and replaced with the regular one under the Ghana School Feeding Programme (GSFP).

The Public Relations Officer of the GSFP, Mr Siiba Alfa, in an interview with the Junior Graphic, explained that the provision of the hot meals for students in both private and public schools was a temporary measure against the COVID-19 pandemic to retain them in school and discourage them from moving around to look for food.

Mr Alfa noted that children in beneficiary schools under the GSFP would continue to enjoy their meals as they did previously.

He said children from kindergarten to primary six in public schools that benefitted from the programme were provided with meals every week after reopening on January 18.

Asked if the government would include JHS students, Mr Siiba said he was not certain if they would be part of the programme and encouraged parents to provide food for their wards when they went to school.

Mr Alfa said all the caterers under the programme were trained when schools were not in session on how to prepare nutritious meals for the children, especially in the wake of the COVID-19 pandemic.

He said children needed to eat nutritious meals in order to boost their immune systems against COVID-19.

Currently, he said about three million children from over 10,000 schools were benefitting from the programme.

He said the secretariat had developed a policy which was yet to be presented to Parliament  to address all issues relating to the programme, particularly financially and effective monitoring.

The GSFP was introduced in October