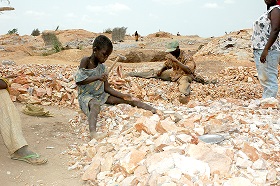 A former Executive Director of the International Federation of Women Lawyers (FIDA), Ms Gloria Ofori-Boadu, has asked the government to work with civil society to prevent, halt and stop child trafficking and child labour, as well as the exploitation and kidnapping of children in the country.

She explained that when children were abused, traumatised and exploited, they grew up into adults who tended to repeat the same phenomenon to other children.

This, she explained, was because that was all that they had grown to know – being exploited, abused and maltreated.

Added to this, she said, was the fact that such children found it difficult to fulfil their potential as adults.

Ms Ofori-Boadu said this during a telephone interview with the Junior Graphic on the strides Ghana has made with regard to the protection of child rights 31 years after the country became the first to sign the United Nations Convention on the Rights of the Child.

She pointed out that Ghana had fallen short in the area of child trafficking, child exploitation, child labour and kidnapping when it came to the protection of children’s rights; something she said no child should be allowed to go through.

She was, however, quick to point out that the country had done well when it came to the aspect of protecting human rights of children and the provision of higher education.

“When it comes to human rights, there have been improvements. For example, the UN Convention on the Rights of the Child makes provisions for children’s rights. Ghana has provided for Children’s Rights under Article 28 of Ghana’s 1992 Constitution.

The Parliament of Ghana has gone further to pass some legislations on protection of children including the Children’s Act 560 (1998).

The Children’s Amendment Act 2016, Act 936 has also been passed by Parliament to make further provisions in respect of foster care, adoption of children and related matters. Article 28 of the UN Convention focuses on higher education for every child and Ghana has made input in that respect with the introduction of the free Senior High School (SHS) programme for every child,” she noted.

On what children could do when they realised that their rights had been abused, Ms Ofori-Boadu advised that the National Commission on Civic Education (NCCE), the Ghana Education Service (GES) and the Ghana Health Service (GHS) must continously keep providing children and adults with education on their rights, explaining that once children knew and appreciated their rights, they could talk about them and confide in somebody when they are abused.

“The Children’s Act says that all government and district assemblies are responsible for children in terms of their special care and protection in their district and once the children, parents, families and neighbours know that something amounts to child abuse, then they can report to district assemblies, especially the Gender and Children’s Committee so that they take steps to protect the children either putting them in foster care or alert social welfare officers to monitor the  children’s development and care within their families.”

She called for a second look into the GH¢2 allotted to meals for every child under the School Feeding Programme, explaining that the amount was woefully inadequate to provide nutritious and adequate meals for the children.