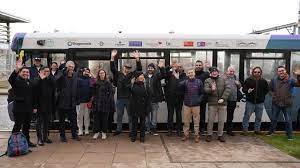 Volunteers were taken on an autonomous Stagecoach single-decker over the Forth Road Bridge, near Edinburgh.

The trial was part of a project to have five self-driving buses run on a route between the capital and Fife.

Stagecoach, which is aiming to launch the full service in the spring, announced that the test had been successful.

Local bus users were asked to take part in the first road test.

One of the passengers, Fleur Dijkman, said: "I wasn't worried at all about it. You wouldn't know the difference between this and a normal bus from the driving."

The test follows successful trials at a depot, track testing and virtual simulation.

The pilot was part of the CAVForth project, which is aiming to have five self-driving buses run timetabled services between Ferrytoll park-and-ride in Fife and the Edinburgh Park train and tram interchange.

The buses will cover the 14-mile route in mixed traffic at speeds of up to 50mph, with capacity for about 10,000 journeys per week.

The vehicles have sensors enabling them to run on pre-determined routes without a driver having to take control.

When fully operational, each bus will have a driver monitoring the system alongside a bus captain who will help passengers with boarding and buying tickets.

The CAVForth project is being run by Stagecoach in partnership with Fusion Processing, Alexander Dennis and Transport Scotland.

The scheme has also been given financial support by the UK government's Centre for Connected and Autonomous Vehicles.

Ivan McKee, the Scottish government's business minister, said: "This is another hugely significant step forward for the CAVForth project that brings us closer to these autonomous vehicles entering service."

Louise Simpson, operations director and CAVForth lead project manager for Stagecoach, said the trial had been successful and that the firm was aiming to launch the autonomous service in the spring.