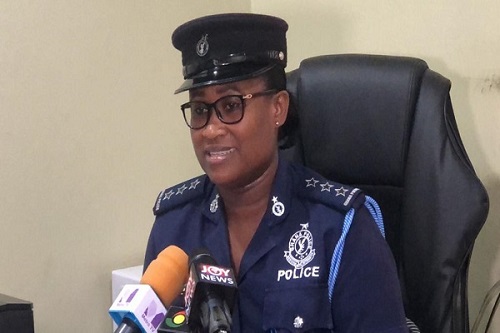 The police has asked children to desist from playing with strange objects they find in their areas as those objects could kill or cause bodily harm to them.

Those objects could also cause many people to get injured, damage or destroy property.

Speaking to the Junior Graphic in Accra, the Head of the Public Affairs Unit at the Accra Region Office of the Ghana Police Service, Deputy Superintendent of Police (DSP) Effia Tenge, said ordinarily, every object or item children came across belonged to someone.

She said, “as a common principle, if you do not know the owner of any item or you did not put it there, you are advised not to pick, touch, kick or temper with it because that item might be hidden intentionally to kill or harm people.”

She added that those items could also be abandoned, discarded, forgotten, concealed or left visibly and could come in any form, size, shape, weight or colour.

DSP Tenge said once the items appeared suspicious, strange or concealed, it should present or raise security risks and care must be taken in approaching them.

"This is because items that appear suspicious may be hazardous and you cannot recognise what it is so don’t temper with them anyhow", she added.

She said if children found an object or objects, they should ask themselves if those items had been hidden or were visible, whether it was something that was uncommon to be found at such a location as a playing ground, at a gate, school or church.

"In some instances, these objects may be connected with pieces of metals, battery power sources, pieces of glass, have some rare tagging or labeling and liquids leaking from it", she noted.

DSP Tenge pointed out that some of the unusual characteristics to note of such items were whether it had an unusual smell, the wires were either expanded or bloated and whether they were led bulbs or lights.

"Draw the attention of parents, guardians or teachers on sighting such suspicious objects.

Also, if there is a need to make a call, do not use your mobile phone near such objects to call someone or the authorities," she cautioned.

She said it was advisable to move further away to approximately 25-metre radius from the object before placing such a call or using a mobile phone.