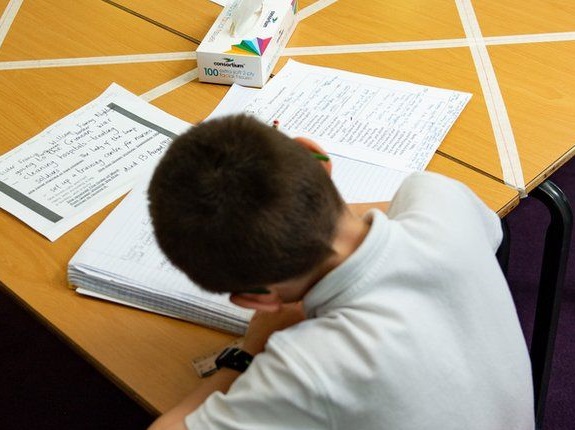 The idea that children must "catch up" with learning lost due to the pandemic is heaping "huge" pressure on them, educational psychologists have warned.

Many pupils have missed out on months of face-to-face teaching, and the PM has appointed a catch-up tsar to lead educational recovery in England.

But the British Psychological Society says children's well being, rather than their learning, should be the focus.

The government said it was funding support for pupils' mental well being.
Mr Johnson has previously said that "no child will be left behind" because of the pandemic, and has appointed Sir Kevan Collins as education recovery commissioner to oversee how England's schools can catch up from the disruption caused by the pandemic.

Sir Kevan said extra hours of academic learning - plus sport, music and drama - will be needed to help pupils make up ground.

But head teachers' leaders have warned against "misconceived and unhelpful" suggestions about longer schools days and shorter holidays to help pupils catch-up.

The BPS said children should be supported through socialization and play, and echoed head teachers' calls for a quality-over-quantity approach to learning, saying there should be a phased return to regular schooling.

Dr O'Hare said it was "unrealistic" to expect children who have lived through such disruption to settle into formal learning.

"Whatever a child or young person's circumstances, we can't assume that the right thing to support their recovery and well being is for them to be in lessons for longer each day," he added.

A Department for Education spokesman said: "We know the pandemic has had an impact on many children and young people's mental health and well being, and that's why we are working to fully reopen schools as soon as possible.

"Our guidance has emphasized the importance of pastoral support both in school and as part of remote provision and included advice and support on mental well being.

"The £650m catch-up premium funding can be used for pastoral support activity where needed to support re-engagement and recovery.

"To support children returning to schools, our £8m well being for Education Return program funds local expert support for education staff to respond to emotional and mental health pressures some children and young people may be facing."