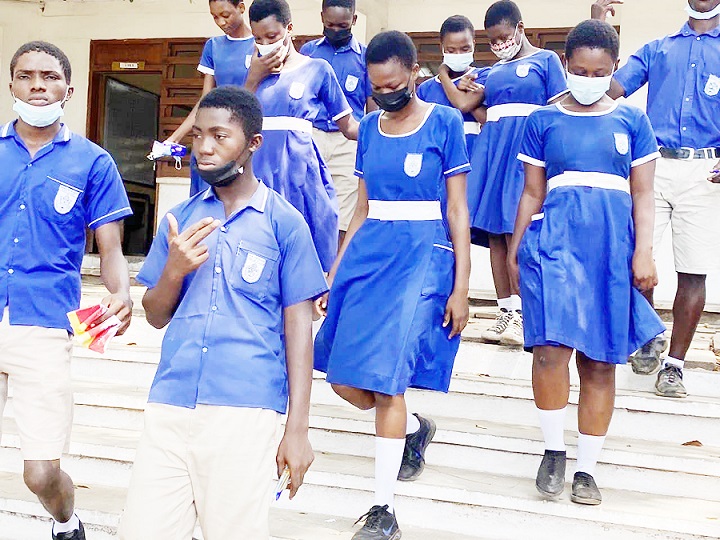 BECE candidates of the Kaneshie Bishop School in Accra stepping out of the examination room after writing the last paper.

There was spontaneous jubilation at most centres as candidates writing the Basic Education Certificate Examination (BECE) finished the examination last Friday.

At most of the centres visited by the Junior Graphic, immediately the bell sounded for the end of the last paper, which was Information and Communication Technology (ICT), while  some of the candidates danced, others took to singing.

In an interview with the Supervisor of the centre, Mr James Kofi Yeko, all the students had been present since day one and also observed the COVID-19 safety protocols.

He said the centre accommodated 217 candidates comprising 101 boys and 116 girls from 10 private schools, including a deaf school, House of Grace for the Deaf at Aplaku, Accra.

Ralph Demordzi, a candidate from the Saints Peter and Paul Catholic School at Dunkona, said all the papers were okay and the last paper, ICT, was very easy.

He expressed the hope that with his performance, he could get one of the three boys’ schools he had chosen.

“I am just happy that I have completed another phase of my life. I am looking forward to going to St Mary’s Senior High School because that is my dream school,” said Racheal Adepa Ansah-Sarfo, a student of Prenas Educational Complex at Aplaku in Accra.

At the Accra Academy Examination Centre, Selina Osei reports that some students sang a thanksgiving song and prayed to God for a successful examination after the paper was collected by the invigilators and came out of the examination hall beaming with smiles.

Fredrick Tetteh, a candidate from Kaneshie North 1 JHS, said he was happy to have completed JHS successfully and how he predicted the BECE to be was the exact opposite because all the papers went well for him.

He said he would work to wait for his results.

Elsie Tetteh, a candidate from Class Peter Memorial School, Bubuashie, said she was not able to write the Mathematics and Integrated Science papers to her satisfaction but she expressed the hope that she would pass the examination with flying colours.

From Senya Bereku in the Central Region, Emmanuel Bonney reports that there were jubilant scenes at the Senya Senior High School after the BECE candidates had written their last and final paper.

They suddenly began singing various Gospel tunes amid dancing as they left the examination halls after writing the ICT paper.

Others went on a procession from the Senya SHS to the Senya town while singing.

In separate interviews with the Junior Graphic, they said they were excited about finishing the examination.

Master Sammy Hayford, a candidate from the Day Star Academy, said he could not wait to be a beneficiary of the free SHS programme.

He described the examination as ‘cool’ although there were a couple of the papers that were tricky.

Another candidate, Mary Andoh, expressed the hope of sailing through, adding that "at long last the tension is over."

The Supervisor at the MEGHIS Centre at Mamfe in the Eastern Region, Ms Barbara J.T Thompson, in an interview said the 2021 BECE ended without any incident at the centre which comprised 265 candidates from eight schools — two private and six public schools, reports Hannah A. Amoah.

She said the students listened to all instructions that were outlined for them.

However, she said there was only one absentee which she was later to learn had passed away.

A student of the Korkormu M/A Basic School, Sharfatu Abubakar said she was expecting graph work and construction in the Mathematics paper but was disappointed. Despite that she said she managed to finish even though the time given was very limited.

She hopes to get good grades to enable her gain admission to St John's Grammar School.

Eric Amoah of Saforo M/A Basic School complained about the Science paper which he said was difficult.
He did not find any problem with the other papers.

David Klu of Mamfe Presby JHS said all his tips in the Religious and Moral Education, ICT and English came so he is expecting good grades in order to gain admission to his first choice school.