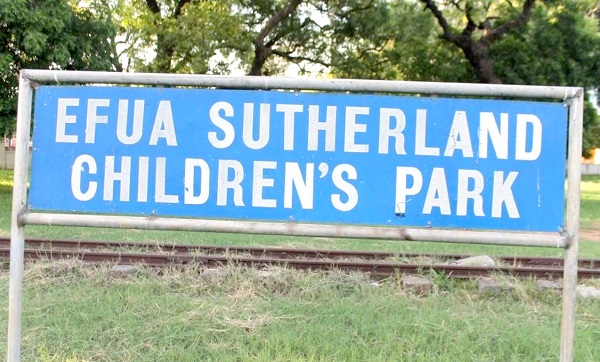 I believe you have all heard about the Efua Sutherland Children’s Park in Accra. It was established in 1979.

Do you know that the park is located in the heart of the city of Accra on a 14.83 acre of land opposite the National Theatre at West Ridge in the Greater Accra Region of Ghana?

The park is big enough to accommodate about 1,000 children.

She was a cultural advocate for children from the early 1950s until her death in 1996 and she played an instrumental role in developing educational curricula, literature, theatre and film for, and about Ghanaian children.

Her 1960 photo essay Playtime in Africa, co-authored by Willis E. Bell, highlighted the importance of play in children's development.

Apart from that, by her leadership in the 1980s, Efua Sutherland developed a model public children's parks system for the country.

She also presided over Ghana’s ratification of the United Nations (UN) Convention on the Rights of the Child and was a dynamic chairperson of the National Commission on Children from 1981 to 1991.

The name of the park was given by the then board of the National Commission on Children because of the extensive work she did on children.

The park was then  named after her as the Efua Sutherland Children's Park and  inaugurated on March 6, 1996 as part of the Independence Day celebrations.

So you see, she was so much interested in children and issues that affected them.

There are a lot of activities that take place at the park; they include funfairs, flower fairs, pork shows, motor shows, indomie festivals, cultural festivals and birthday parties.

All of them are beyond repairs. In view of this, whenever there is a programme for children, the equipment are brought in for them to have fun with and then taken away at the end.

The management of the park has big future plans to revamp the place for children.

When it is finalised, the park will have, among others, a mini golf course for children, basketball court, canopy walk way, mini zoo and a new train.

For now, you should all keep your fingers crossed and wait patiently for the authorities to revamp the park so that you children within and outside Accra can enjoy yourselves.