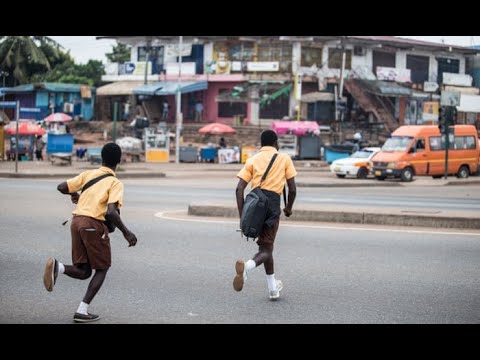 A three day exercise known as Kids Road Safety Panel (KRSP) has been used to educate pupils and some commercial drivers in Accra and Tema on how to use the road safely.
The selected schools were Rev. Thomas Clegg Methodist Schools and Community 8 Number 3 & 4 Basic Schools.

The pilot initiative was carried out by AMEND Ghana, a non governmental organisation focused on road safety, in collaborated with the National Road Safety Authority and the Ghana Road Transport Coordinating Council (GRTCC).
It included the use of theory and practical lessons on road safety where the entire school population was educated and 20 students were selected and trained to constitute a panel for a discussion on road safety.
The KRSP panel sessions was led by trained students who spoke to drivers from the GRTCC on some road traffic regulations in relation to some traffic offences such as speeding, wrongful overtaking, use of mobile device while driving, non usage of seat belts, among others and the need to behave appropriately when using the road.
The organisers modeled miniature road settings which were used for basic instruction in safety principles and a test of knowledge on road safety. -
They also used the role play of pedestrians, motorists and cyclists to test skills, to help children identify traffic hazards, and to teach practical safety prevention measures.
At the end of the programme, the 20 trained children were awarded certificates as road safety ambassadors who would share their knowledge with their parents, family and friends to help reduce road crashes, especially pedestrian knockdowns.
The drivers that participated in the KRSP sessions were made to pledge not to repeat wrongful acts when using the road.
The National Road Safety Authority has indicated over the years that aside from reckless driving lack of knowledge on the part of pedestrians also lead to road crashes.

Objective
AMEND Ghana educate drivers, pupils on road safety
A Programme Officer at AMEND Ghana, Ms Edna Nortey, explained that the exercise targeted pupils because they were one of the most vulnerable groups when it comes to road usage while the commercial drivers spend a greater part of their days on the road.
Road Traffic Injury is the leading cause of deaths in young people between the ages of five and 29years as revealed by the Global Status Report on Road Safety 2018.
Through the KRSP pilot programme, she said AMEND Ghana aims at empowering children to speak up to road safety issues and to imbibe in the pupils and drivers road safety attitudes which may change their mindset as they had been taken through the road traffic regulations and the implications of all that they do on the road.
The exercise, she said will influence change in attitudes towards pedestrian safety and the safety of other road users.
She was hopeful that KRSP pilot programme will translate in the reduction of road traffic injuries and fatalities among vulnerable road users especially children.
Ms Nortey was optimistic that both the drivers and pupils would be cautious while using the road.
She said AMEND Ghana was a member of the United Nations Road Safety Collaboration, the coordinating body for road safety issues across the United Nations system and was also working in line with the new Decade of Action for road safety.
Ms Nortey hinted that AMEND had over the years developed, implemented and evaluated evidence-based programs to reduce the incidence of road traffic injuries in Africa.

Commendation
Some of the pupils said they were happy to learn about road safety and some traffic laws.
They said even though they often use the road in their journeys to school, they were ignorant about how to stay safe on the road.
They were also ready to serve as role model for others to behave safely and socially responsible while on the road.
The General Secretary of GRTCC, Mr Emmanuel Ohene Yeboah, said drivers have a responsibility “to keep our roads safe at all times so this KRSP is a very interesting and creative way to remind us of our responsibilities”.
The headmistress of Community 8 Number 3 Basic School, Ms Bernice Sefakor Doviah said the exercise would save lives as it had imparted traffic rules to the pupils and explained the role of drivers to help them exercise cautiousness when using the road.

Fact sheet
Road Traffic Injury is the leading cause of deaths in young people between the ages of five and 29years as revealed by the Global Status Report on Road Safety 2018.