Jordan: No extradition of FBI's 'most wanted terrorist' 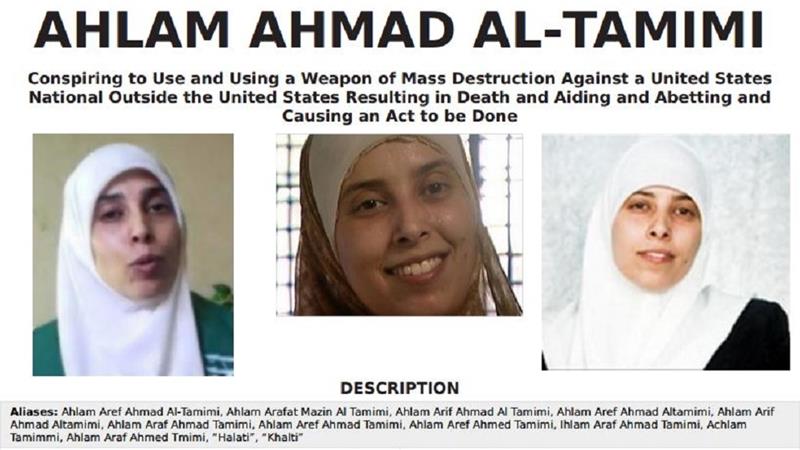 The FBI's most wanted poster identifying Tamimi for 'conspiring to use a weapon of mass destruction'
30.5k Shares

Jordan's highest court has blocked the extradition of a Jordanian woman who faces US charges in the 2001 bombing of a Jerusalem pizza restaurant that killed 15 people, including two Americans.

The US indictment against Ahlam al-Tamimi was unsealed last week.

Jordanian state media reported on Tuesday that a day earlier, Jordan's Court of Cassation upheld a lower-court decision on grounds that Jordan and the United States don't have an extradition treaty.

The military's news website Hala Akhbar quoted al-Tamimi as saying she had been confident the Jordanian judiciary "will be fair to me".

US prosecutors allege she accompanied the suicide bomber and ordered him to detonate the explosives.

Tamimi was imprisoned in Israel for 10 years of a 16-year sentence, but released to Jordan in a 2011 prisoner swap between Israel and the Palestinian group Hamas.

She was convicted by an Israeli court in 2001 of involvement in the attack in Jerusalem - carried out by Hamas' armed wing - that killed 13 Israelis, two Americans, and wounded more than 120 others.

"Extradition requests sent by foreign countries to the relevant authorities in Jordan cannot be accepted unless they are based on an enforceable [extradition] treaty or agreement," an unidentified source was quoted as saying by Jordan's official Petra news agency.

The US Justice Department recently requested Tamimi's extradition to the United States after the FBI put her at the top of its list of wanted "terrorists".

"We call upon the free people of the world to remember the Palestinian prisoners still languishing in Israeli jails."