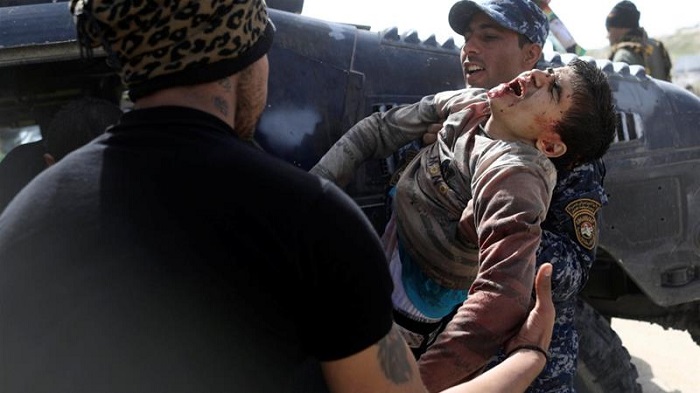 Iraqi forces battling ISIS/ISIL faced tough resistance from snipers and mortar rounds on Monday as they tried to advance on Mosul's Old City and a bridge across the Tigris River in their campaign to retake it.

Progress was slowed by heavy rain but units were only 100 metres from the Iron Bridge that connects the Old City with the eastern side of Mosul, military officials said.

Since starting the campaign in October to push the Islamic State of Iraq and the Levant (ISIL) out of its last stronghold in the country, Iraqi forces with US-led coalition support have recaptured eastern Mosul and about 40 percent of the city's west.

Federal police and rapid response brigades - an elite interior ministry unit - said over the weekend they had entered the Bab al-Tob area of the Old City, where fighting is expected to be toughest because of its narrow alleyways where armoured vehicles cannot pass.

But advances in the area stalled on Monday.

"Due to the bad rainy weather, operations have been halted for now. We are facing stiff resistance from the Daesh [ISIL] fighters with sniper shots and mortars," an officer told Reuters news agency.

Troops exchanged fire with snipers, while trying to drag blinds made of blankets and curtains across streets to obscure their movement. Heavy explosions later hit a hotel where ISIL gunmen had been returning fire.

"We're moving on the old bridge ... and then we will free that area and hopefully in a few days we'll liberate the west side of Mosul," said one Iraqi captain.

As many as 600,000 civilians are trapped with ISIL fighters inside Mosul, which Iraqi forces effectively sealed off from the remaining territory the hardline group controls in Iraq and Syria. Iraqi forces include army, special forces, Kurdish Peshmerga, and Shia militias.

More than 200,000 Mosul residents have been displaced since the start of the campaign in October, of which more than 65,000 fled their homes in the past two weeks alone, according to the International Organisation for Migration.

Residents fled from the Wadi Hajjar district carrying bags and belongings through the muddy streets to areas controlled by the army before being transported out by truck.

"It was a nightmare and we are finally done with it. It cannot be described. There is no water and there is no food and nothing," said Ghanem Mohamed, one of the residents who fled.

Capturing the Iron Bridge would mean Iraqi forces control three of the five bridges spanning the Tigris River between eastern and western Mosul, all which have been damaged by ISIL and US-led air strikes.

The two southernmost bridges have already been retaken by Iraqi forces.

Losing Mosul would be a major loss for ISIL. It is by far the largest city the group has held since its leader Abu Bakr al-Baghdadi proclaimed himself head of a self-styled caliphate spanning Iraq and Syria from a mosque in Mosul in the summer of 2014.