IS 'retreating' in key Syria town

Islamic State militants are retreating in parts of the northern Syrian town of Kobane in the face of US-led air strikes, a Kurdish official has said.

Idriss Nassan told the BBC IS had lost control of more than 20% of the town on the border with Turkey in recent days.

Activists say more than 600 people have been killed since the jihadist group launched its assault a month ago.

On Wednesday, US and European leaders agreed on the need to do more to stop the advance of IS in Iraq and Syria.

In a video conference, US President Barack Obama and the leaders of the UK, France, Germany and Italy said they would step up support for an "inclusive political approach" in Iraq and training for local forces.

Mr Nassan, deputy head of Kobane's foreign relations committee, said the Kurdish the Popular Protection Units (YPG) had made progress against IS in the town since the US-led air strikes were stepped up.

"Maybe in the few past days [Islamic State] was controlling about 40% of the city of Kobane, but now... less than 20% of the city is under control of [IS]," he said. "[On Wednesday], YPG started cleaning [up]operations in the east and south-east of Kobane." 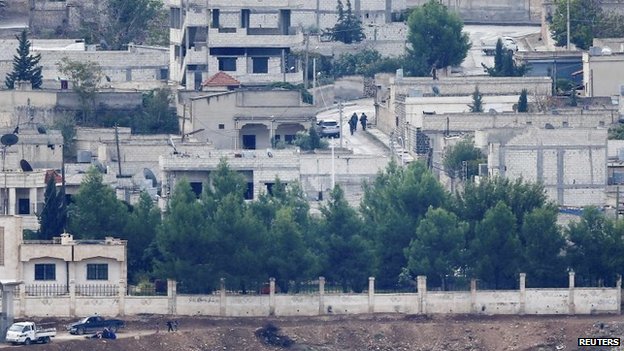 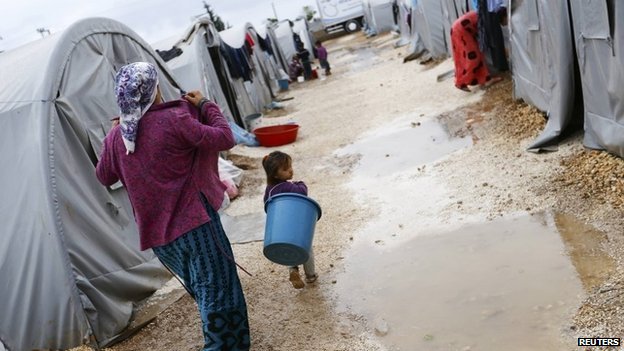 More than 160,000 Syrians have fled across the border to Turkey and are living in camps

A journalist in Kobane, Abdulrahman Gok, told the Reuters news agency on Thursday: "We walked past some (YPG) positions in the east yesterday that were held by IS only two days ago."

"Officials here say the air strikes are sufficient but ground action is needed to wipe out IS. YPG is perfectly capable of doing that but more weapons are needed," he added.

Pentagon spokesman Rear Admiral John Kirby said the situation was fluid, with pockets in the town still held by IS.

Kobane was still in danger of falling because increasing numbers of jihadists were joining the battle, he warned.

"The more they want it, the more resources they apply to it, the more targets we have to hit," he added. "We know we've killed several hundred of them."

The Syrian Observatory for Human Rights, a UK-based activist group,reported that 662 people had been killed since IS launched its offensive on Kobane on 16 September. They included 374 jihadists, 268 fighting on the Kurdish side, and 20 civilians, it said.

The strikes on Kobane began on 1 October, according to US Central Command, which said on Wednesday that it had carried out 18 in the previous 24 hours, and 21 in the 24 hours before that.

The BBC's Kasra Naji, on the Turkish border near Kobane, says there is an air of optimism among the Kurdish fighters, and a belief that they could drive IS out of the town in a few days.

Our correspondent says coalition aircraft now appeared to be targeting a single location, suggesting that this is probably the last area in the town held by IS after its strength was degraded by heavy strikes on Tuesday.

The battle for Kobane, which is also known as Ayn al-Arab, is regarded as a major test of whether the coalition's air campaign can push back IS.

More than 160,000 people have fled the mainly Kurdish town in the face of the IS advance. Adm Kirby said hundreds of civilians were still there.

Five more strikes were carried out against IS militants in Iraq - four near Baiji and one near Haditha Dam, US Central Command said.

Meanwhile the jihadists are said to be advancing on the Iraqi town of Amariya al-Falluja, one of the last still controlled by government forces in Anbar province and only 40km (25 miles) from the capital Baghdad.

As the fighting and air strikes continued, the US military announced that it had named the operation against IS "Inherent Resolve".