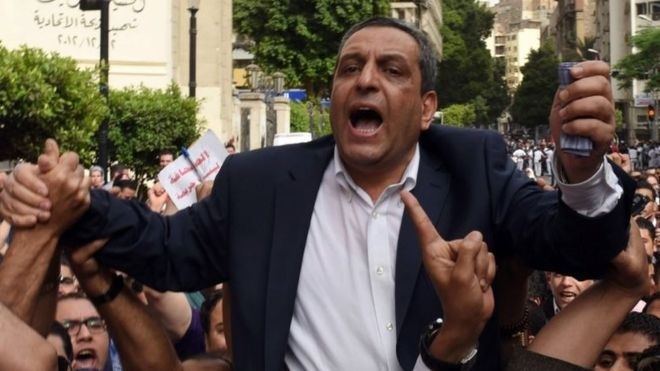 The head of the journalists' union in Egypt and his two colleagues have been sentenced to two years in prison for "harbouring fugitives".

A court in Cairo also allowed Yehia Qallash and board members Gamal Abdel Rahim and Khaled al-Balshy to pay a $630-bail (£510) pending an appeal.

In May, police raided the union's headquarters in the capital, arresting two opposition journalists.

The two had sought shelter in the building from arrest warrants.

They are accused of inciting protests against a decision by the Egyptian authorities to hand over two islands in the Red Sea to Saudi Arabia.

Critics of President Abdul Fattah al-Sisi have condemned the transfer of the islands as unconstitutional and lacking in transparency.

Dozens of Egyptian and foreign journalists were briefly detained or arrested earlier this year while covering protests over Mr Sisi's decision.

Mr Sisi, who has suppressed all dissent since leading the military's overthrow of democratically elected President Mohammed Morsi following mass protests in 2013, said at the time that "evil" forces were conspiring to destabilise the state.