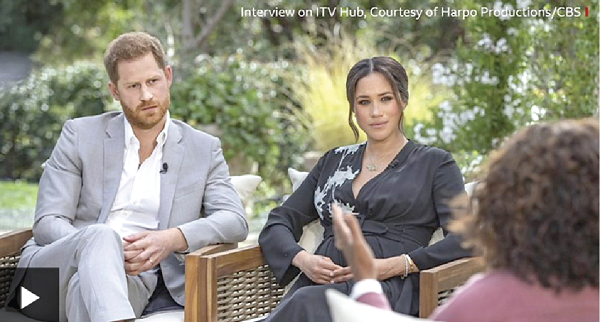 Meghan and Harry during the interview
30.5k Shares

The race issues raised by the Duke and Duchess of Sussex are "concerning" and will be addressed by the family privately, Buckingham Palace has said.

In a statement, the Palace said "recollections may vary" but the claims made in their interview with Oprah Winfrey were "taken very seriously".

Meghan told Winfrey Harry had been asked by an unnamed family member "how dark" their son Archie's skin might be. The Palace said the Sussexes would "always be much loved family members".

Pressure had been growing on Buckingham Palace to respond after Meghan - the first mixed-race member of the modern Royal Family - revealed the comments about their son's skin colour.

Prince Harry later clarified to Winfrey that the comments were not made by either the Queen or the Duke of Edinburgh.

The statement, which came a day and a half after the interview was first broadcast in the US, said: "The whole family is saddened to learn the full extent of how challenging the last few years have been for Harry and Meghan.

"The issues raised, particularly that of race, are concerning. Whilst some recollections may vary, they are taken very seriously and will be addressed by the family privately."

The response from Buckingham Palace came after crisis meetings involving senior royals in the wake of the deeply personal interview by the Sussexes, who spoke about racism, mental health, the media and other members of the Royal Family.

The duchess - who is the first mixed-race member of the modern Royal Family - said a low point came when Harry was asked by an unnamed royal family member "how dark" their son Archie's skin might be.

Meanwhile, US President Joe Biden's spokeswoman said he would praise anyone for having the courage to speak out about mental health.

White House Press Secretary, Jen Psaki described Prince Harry, 36, and Meghan, 39, as "private citizens" who were "sharing their own story in their own struggles".

The two-hour interview was broadcast last Sunday by CBS in the US and was screened in the UK on ITV last Monday night.

In the interview, the duchess said that she found royal life so difficult that at times she "didn't want to be alive any more", and when she approached the institution for help, she did not get it.

Labour Leader, Sir Keir Starmer said that Meghan's allegations about racism and a lack of mental health support should be taken "very seriously".

Prime Minister Boris Johnson declined to comment last Monday, but said he has "always had the highest admiration for the Queen and the unifying role she plays".

He said "when it comes to matters to do with the Royal Family, the right thing for Prime Ministers to say is nothing", after being asked specifically if he believed the Royal Family was racist.