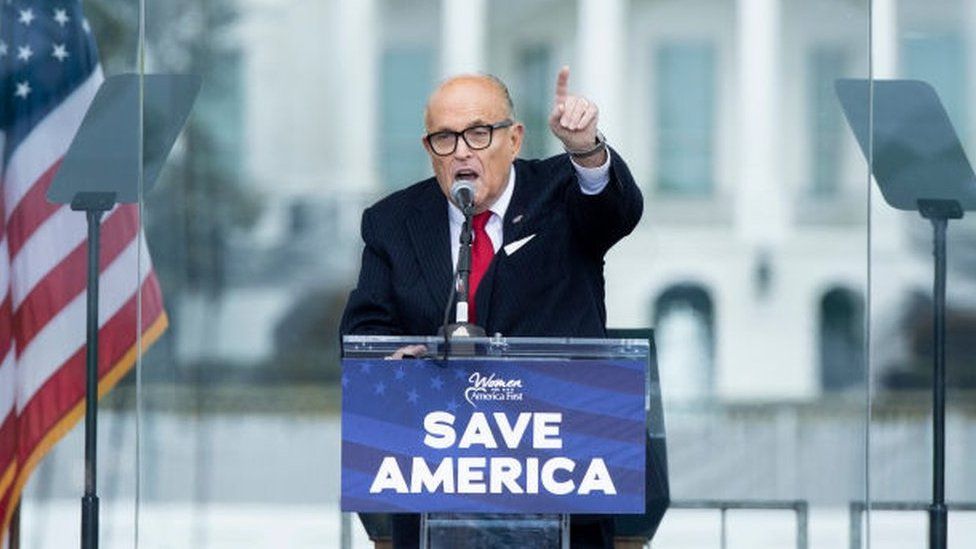 Trump campaign officials, led by Rudy Giuliani, oversaw efforts in December 2020 to put forward illegitimate electors from seven states that Trump lost, according to three sources with direct knowledge of the scheme.

The sources said members of former President Donald Trump's campaign team were far more involved than previously known in the plan, a core tenet of the broader plot to overturn President Joe Biden's victory when Congress counted the electoral votes on January 6.

Giuliani and his allies coordinated the nuts-and-bolts of the process on a state-by-state level, the sources told CNN. One source said there were multiple planning calls between Trump campaign officials and GOP state operatives, and that Giuliani participated in at least one call. The source also said the Trump campaign lined up supporters to fill elector slots, secured meeting rooms in statehouses for the fake electors to meet on December 14, 2020, and circulated drafts of fake certificates that were ultimately sent to the National Archives.

Trump and some of his top advisers publicly encouraged the "alternate electors" scheme in Pennsylvania, Georgia, Michigan, Arizona, Wisconsin, Nevada and New Mexico.
But behind the scenes, Giuliani and Trump campaign officials actively choreographed the process, the sources said.

One fake elector from Michigan boasted at a recent event hosted by a local Republican organization that the Trump campaign directed the entire operation.

"We fought to seat the electors. The Trump campaign asked us to do that," Meshawn Maddock, co-chair of the Michigan Republican Party, said at a public event last week that was organized by the conservative group Stand Up Michigan, according to a recording obtained by CNN.

Maddock was also one of the 16 Trump supporters from Michigan who served as fake electors and signed the illegitimate certificate that was sent to the National Archives.

"It was Rudy and these misfit characters who started calling the shots," a former Trump campaign staffer said. "The campaign was throwing enough sh*t at the wall to see what would stick."

Integral to the Jan 6 plan
The scheme was integral to Trump's plan to get then-Vice President Mike Pence to throw out Biden's electors and replace them with the GOP electors on January 6 when Congress counted the electoral votes. It has also come under renewed scrutiny by the January 6 select committee and state attorneys general, raising questions about the involvement of Trump's campaign and whether any laws were broken.

Committee chairman Rep. Bennie Thompson of Mississippi told reporters Thursday the panel is looking into whether there was a broader conspiracy or involvement from the Trump White House in the creation or submission of these fake electors.

In its subpoena letter sent to Giuliani on Tuesday, the House committee specifically references his efforts to convince state legislatures to overturn election results. The document cites Giuliani's comments from December 2020 in which he publicly urged lawmakers in Michigan to award the state's electoral votes to Trump.

One of the pro-Trump electors from Pennsylvania, Sam DeMarco, told CNN there was a last-minute dispute, where the state's GOP electors pushed Trump campaign officials to add legal caveats to the fake certificate to say they were only electors-in-waiting, if Trump's legal challenges prevailed.

The fake documents from Pennsylvania and New Mexico ultimately contained these caveats, but the documents from the other five states explicitly claimed, falsely, that the pro-Trump electors were the rightful electors.

It's not clear that any of the fake electors themselves participated in strategy sessions with top Trump campaign brass. But both Maddock from Michigan and DeMarco from Pennsylvania have said they were in direct contact with members of the Trump campaign.

Many of the players involved in the scheme, including Maddock, stand by their actions and are still pushing the lie that the 2020 election was stolen. Giuliani, a Trump spokesperson and a representative from Stand Up Michigan did not respond to CNN's requests for comment.

Advancing the lie that the election was stolen
After Trump failed to stop battleground states from certifying Biden's victory, Trump campaign officials, led by Giuliani, launched its parallel effort to disrupt and undermine the Electoral College process. This included publicly promoting false claims of fraud, while quietly exploring the fast-diminishing avenues to overturn the results.

Trump hoped Republican legislators from the seven battleground states would replace Biden's authentic electors with the rogue GOP slate, and that Pence would seat those electors during the joint session of Congress on January 6.

A source familiar with the situation told CNN that Pence was concerned about the possibility of "alternate electors," and his team carefully worded what he said that day during the Electoral College certification to recognize only the legitimate electors.

One of the sources with direct knowledge of the scheme, a former Trump campaign staffer, told CNN that Giuliani worked closely on the seven-state stunt with Christina Bobb, a correspondent for the pro-Trump propaganda network One America News.

Many of Giuliani's unhinged conspiracies about the 2020 election found a home at OAN. And in a deposition last year as part of a civil lawsuit, Giuliani said Bobb was "very active in gathering evidence" as "part of the legal team" working for Trump's campaign during the presidential transition.

Bobb reached out to a top Arizona legislator about supposed voter fraud, according to emails obtained by the government oversight group American Oversight through a public records request. In the December 4, 2020, email Bobb said she was sending the message on Giuliani's behalf. The emails flesh out how Trump's team was trying to press state legislatures to overturn the results.

"They were all working together. Rudy, John Eastman, and Christina Bobb, in tandem, to create this coverage for OAN, to advance the Big Lie," the former Trump campaign staffer told CNN.

The Washington Post first reported new details about the role of Giuliani and Bobb.

Battleground Michigan
Republicans in Michigan were central to the effort to try and overturn the election results and Meshawn Maddock -- along with her husband State Rep. Matt Maddock -- were instrumental to the effort inside the state.

The Maddocks have deep ties to Trump. The former president has endorsed Matt Maddock in his bid to be Michigan House leader. Maddock tweeted a photo last year of an article written about his campaign that Trump had signed, and added, "Matt, I am with you all the way."

In the months leading up to January 6, Matt Maddock consistently pushed Trump's lie about the election. In early December 2020, Matt Maddock and other state GOP lawmakers in Michigan held a series of hearings seeking to validate unfounded claims of widespread voter fraud -- prompting a personal visit from Giuliani.

When the effort to convince state legislators in Michigan to block Biden's electors ultimately failed, Maddock was among the GOP lawmakers from five states who sent a letter to Pence on January 5, urging him to delay certification of the electoral votes. Pence refused to go along with the plan.

Meshawn Maddock is equally close to Trump and is still peddling the lie that the election was stolen.

Along with being an elector, she also helped organize buses to take GOP activists to Washington for protests around January 6 and took part in the march to the US Capitol. She later disavowed the violence that came after the march.

Maddock was named co-chair of the Michigan Republican Party one month after January 6. But as she is gaining prominence, her role as a fake elector is also attracting legal scrutiny.

"Under state law, I think clearly you have forgery of a public record, which is a 14-year offense, and election law forgery, which is a five-year offense," Michigan Attorney general Dana Nessel, a Democrat, told MSNBC last week, about the fake certificates signed by pro-Trump electors.

No one, including Meshawn Maddock, has been charged with any crimes related to the scheme.

"This is nothing more than political prosecution of convenience led by Dana Nessel," said Gustavo Portela, MIGOP Communications Director, when asked about Maddock's comments and role as a fake elector.

But the documents from Pennsylvania and New Mexico contained clauses saying that the Trump supporters were electors-in-waiting, in case a court or some other proceeding later ruled that they were the "duly elected and qualified electors."

If anything, this provided a veneer of legal protection for Trump supporters who were trying to exploit the Electoral College process to overturn an election.

Demarco, who was one of the state's pro-Trump electors, and is the chairman of the Allegheny County Republican Committee, told CNN he and other alternate electors signed the certificate at the Trump campaign's request but first demanded the language be changed to make clear it was not intended to contest the will of voters in that state who voted for Biden.

The hedging language was included at the last moment as the Trump campaign had concerns, and questioned whether the change was appropriate in the immediate lead-up to December 14, according to a Trump campaign staffer with knowledge of the matter.

Ultimately the Trump campaign acquiesced. But the internal debate shows that even some of Trump's strongest allies were concerned about the attempts to overturn the 2020 election.

The office of Pennsylvania Attorney General Josh Shapiro, a Democrat, said in a statement that they looked into the matter but concluded that the fake certificate was not an illegal forgery.

"These 'fake ballots' included a conditional clause that they were only to be used if a court overturned the results in Pennsylvania, which did not happen," the statement said. "Though their rhetoric and policy were intentionally misleading and purposefully damaging to our democracy, based on our initial review, our office does not believe this meets the legal standards for forgery."

Concerns about democracy
Democratic lawmakers, state officials, and Biden himself have roundly condemned the fake electors plot. Biden brought it up at a news conference Wednesday when asked about his stalled voting-rights bills in Congress.

"I never thought we would get into a place where we were talking about... what they tried to do this last time out -- Send different electors to the state legislative bodies to represent who won the election, saying that I didn't win but the Republican candidate won," Biden said. "I doubt that anyone thought that would happen in America in the 21st century, but it is happening."

The coordinated nature of these fake elector efforts and the rising power of Big Lie-promoters in Republican circles has concerned voting rights organizations across the country.

Nancy Wang, executive director of the Michigan-based Voters Not Politicians, said her group was founded in 2016 to address redistricting and voting access, but Trump's attempt to overturn the 2020 election spurred her group to focus on countering anti-democratic efforts at large.

"This is existential. This about the very fundamental institutions of our government - whether we can vote at all, whether we have any power whatsoever," Wang said.
"It is a completely different time that we are facing in 2020 and 2022. It really feels urgent. It is a battle of a completely different kind. It is massive, it is coordinated at a national level. It is much more threatening."