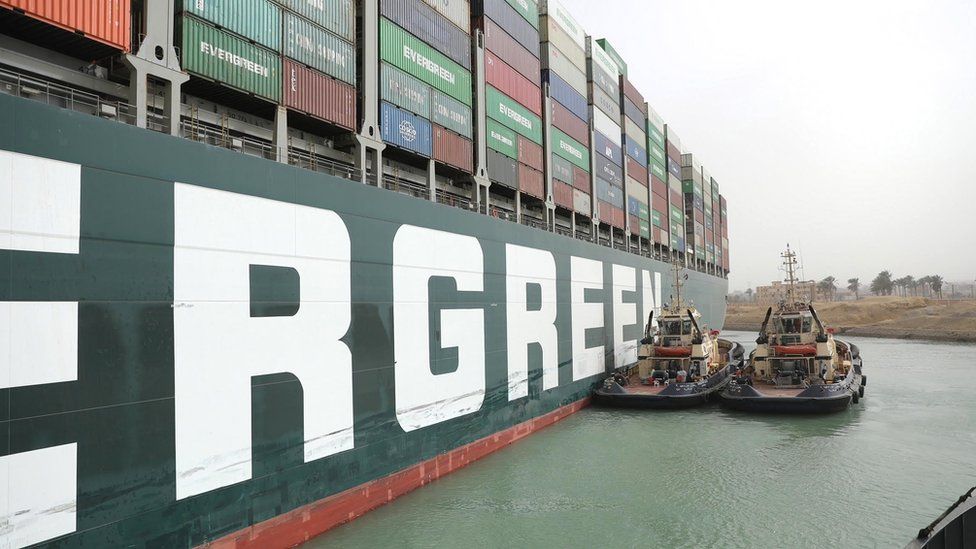 A giant ship that blocked the Suez Canal for nearly a week has been finally freed, the Egyptian authorities say.

The 400m-long (1,300ft) Ever Given was wedged across the canal before salvage crews dislodged her on Monday.

It was not immediately clear when full traffic could resume in the canal.

Suez is one of the world's busiest trade routes, and companies were forced to reroute ships, causing long tailbacks of hundreds of vessels.

Egyptian media said the Ever Given had started moving along the channel after having been fully refloated. Live TV footage showed the ship aligned in a straight position along the canal.

Disruption to global trade will not end with the refloating of the Ever Given. According to Lloyds List, there are currently more than 370 ships waiting to pass through the canal, including container vessels, tankers, and bulk carriers. Clearing that backlog is expected to take several days.

Some ships have already left the region, preferring to take an alternative, longer route around the southern tip of Africa. They will be joined by other vessels travelling from East Asia to Europe - whose operators have decided not to risk waiting for the canal to reopen.

Inevitably, cargoes will be reaching their destination much later than planned, there may be congestion when they arrive in ports while future sailing schedules have been thrown into disarray.

The cost of shipping goods to Europe is expected to rise as a result. Industry experts are warning that the knock-on effects on delicately balanced supply chains could be felt for months to come.

In pictures: Container ship blocking the Suez Canal finally on the move

After almost a week blocking the Suez Canal, a a 400m-long (1,300ft) container ship is finally on the move again.

The Ever Given, operated by Evergreen Marine Corp, became stuck last Tuesday during a sandstorm.

For days it was lodged diagonally on one of the world's key shipping lanes, causing traffic to build up and other ships to be rerouted.

But now, after an operation involving tug boats and dredging, the vessel is fully refloated and heading north.

The Ever Given became stuck a week ago, wedging itself diagonally across the canal. PICTURE BY EPA

Officials from the Suez Canal Authority visited the stranded ship last week to work out a rescue plan. PICTURE BY EPA

Tug boats were deployed to shift the 200,000-tonne vessel. PICTURE BY EPA

Dredgers cleared approximately 30,000 cubic metres of sand from around the ship's hull. PICTURE BY EPA

Nearly 400 other vessels became stuck in a queue behind the ship. PICTURE BY EPA

On Monday, after days of effort, the ship was at last dislodged. PICTURE BY AFP.

The Ever Given continued its passage north. PICTURE BY REUTERS

Last year the Suez Canal was used by an average of 51.5 ships per day. PICTURE BY GETTY IMAGES