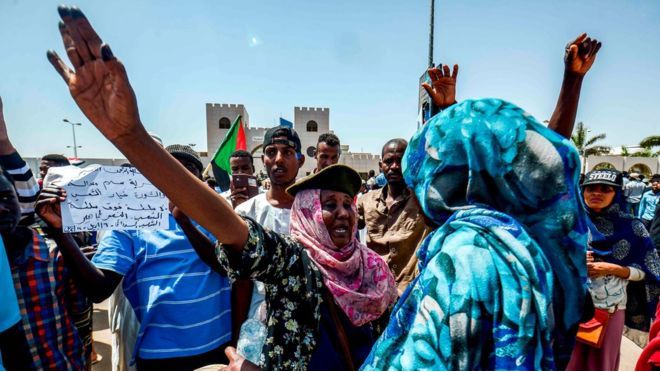 Leaders of the protests in the Sudanese capital Khartoum have called on supporters to stay in the streets two days after the military coup.

They are demanding an immediate move to civilian rule after the army ousted long-time leader Omar al-Bashir, putting him in custody.

The military wants to hold power for two years, followed by elections.

His departure was announced hours after the coup leader himself, Defence Minister Awad Ibn Auf, stepped aside.

No official reason has been given for either departures.

Privately-owned Sudan News 365 reports that opposition leaders are meeting with the military on Saturday to discuss "transitional arrangements".

The Sudan Professionals Association (SPA), which has been spearheading the demonstrations, announced its negotiating team on its Facebook page.

It had earlier called on the armed forces to "ensure the immediate transfer of power to a transitional civilian government."

Omar el-Digeir, leader of the opposition Sudanese Congress Party, said the military should not be "the sole custodians of power".

A growing economic crisis has gripped the country since the oil-rich southern part split away in 2011, and Thursday's coup followed months of unrest over the cost of living.

Ebba Kalondo, a spokeswoman for the African Union, said it was now time for all sides to talk to each other.

"More now than ever, it's time to engage in an inclusive dialogue, to create the conditions that would make it possible to meet the aspirations of the Sudanese people, to form democracy and good governance and restore constitutional order as soon as possible."