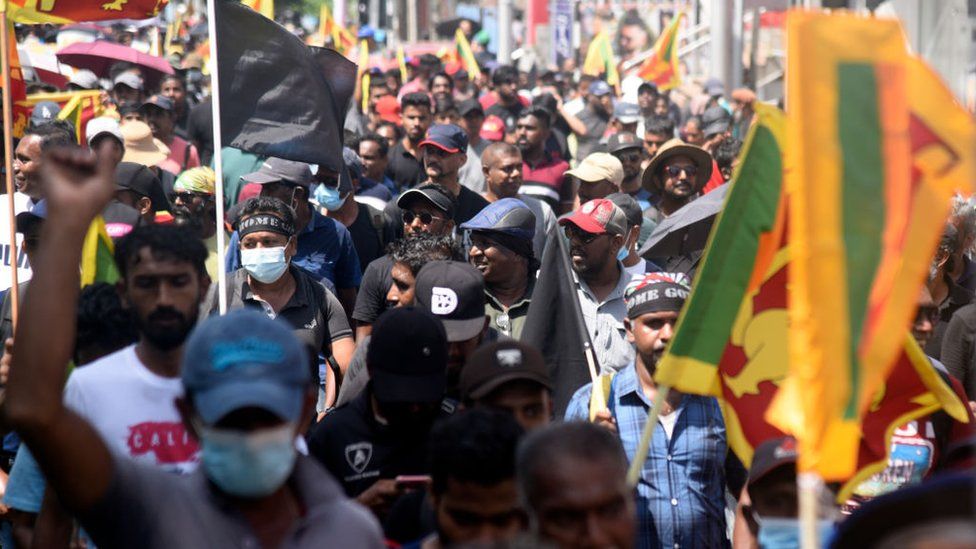 Thousands of protesters have stormed President Gotabaya Rajapaksa's official residence in the capital of Sri Lanka.

Demonstrators from all over the country marched to Colombo demanding his resignation after months of protests over mismanagement of the country's economic crisis.

Reports say he has already been moved to a safer location.

The country is suffering rampant inflation and is struggling to import food, fuel and medicine.

Thousands of anti-government protesters travelled to the capital, with officials telling AFP news agency that some had even "commandeered" trains to get there.

Police fired shots in the air and used tear gas to try to prevent angry crowds from overrunning the residence, but were unable to stop some of the crowd from entering.

"The president was escorted to safety," a senior defence source told AFP. "He is still the president, he is being protected by a military unit."

Facebook livestream footage from inside the building showed hundreds of protesters packing into rooms and corridors, while hundreds also milled around the grounds outside.

BBC footage showed scores of people taking a dip in the palace pool.

Protesters at a different location also managed to enter the president's office, which has been the focus of demonstrations for months.

At least 33 people, including members of the security forces, were injured and were being treated at the National Hospital of Sri Lanka in Colombo, a hospital spokesperson told the BBC Sinhala service.

Authorities had attempted to stop the demonstration from taking place by imposing a curfew on Friday night. But protesters were undeterred, and the curfew was lifted after civil society groups and opposition parties strongly objected to it.

Prime Minister Ranil Wickremesinghe has summoned an emergency meeting of leaders of Sri Lanka's political parties to discuss the crisis. He is also asking the Speaker to convene parliament.

Sri Lanka is an island nation off southern India: It won independence from British rule in 1948. Three ethnic groups - Sinhalese, Tamil and Muslim - make up 99% of the country's 22 million population.

One family of brothers has dominated for years: Mahinda Rajapaksa became a hero among the majority Sinhalese in 2009 when his government defeated Tamil separatist rebels after years of bitter and bloody civil war. His brother Gotabaya, who was defence secretary at the time, is now president.

Now an economic crisis has led to fury on the streets: Soaring inflation has meant some foods, medication and fuel are in short supply, there are rolling blackouts and ordinary people have taken to the streets in anger with many blaming the Rajapaksa family and their government for the situation.

Last week, the authorities suspended sales of petrol and diesel for non-essential vehicles in an attempt to preserve the country's dwindling fuel stocks.

The government has been trying to secure fuel on credit from countries including Russia - so far with no success.

It has requested emergency financial help and it blames the Covid-19 pandemic, which all but killed off Sri Lanka's tourist trade - one of its biggest foreign currency earners - for the crisis.

But many experts say economic mismanagement is to blame.

Demonstrations have been taking place since March demanding that President Rajapaksa quit.

The deepening economic crisis saw the president's older brother, Mahinda Rajapaksa, forced to resign as prime minister in May.