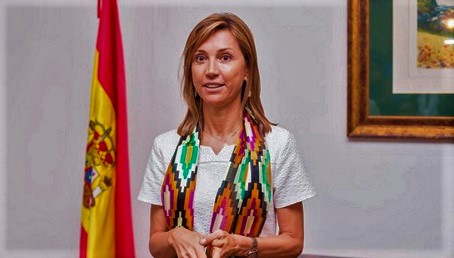 Spain has recently adopted a new comprehensive strategy, III Africa Plan, which seeks to establish a balanced relationship with their African partners based on trust, dialogue and shared responsibilities around four common objectives.

Under the first objective, ‘Peace and Security’, Spain is contributing actively to the fight against violent extremism and terrorism from the Horn of Africa to the Sahel, as well as piracy and all forms of organised crime, including in the Gulf of Guinea where they deploy a vessel that carries out training exercises with the Ghanaian Navy twice a year.

The second objective is ‘Sustainable Development based on inclusive economic growth that is capable of generating decent employment for the youth,” the Spanish AMbassador to Ghana, Mrs Alicia Rico Perez del Pulgar has announced.

Under this, she said Spain observed that the youth is Ghana`s biggest asset and at the same time her biggest challenge.

Spain, therefore, both bilaterally and in the context of the European Union, wishes to contribute to make sure that the demographic dividend is transformed into economic growth, stability and prosperity.

“If the challenge is not met successfully, there is a risk of instability, radicalisation and the tragic loss of more lives of migrants in their hazardous journey to Europe,” she noted.

The Ambassador touched on the third objective, which covers “Good governance, strengthening of institutions and the Rule of Law, respect for human rights, gender equality and the fight against corruption.”

She noted that a Spanish public foundation, FIIAP, was implementing the EU-funded Accountability, Rule of Law and Anti-corruption Programme (ARAP) and was working alongside relevant government institutions and other strategic national stakeholders to reduce corruption, while improving accountability.

The fourth objective is the “Support to orderly, regular and safe migration, not only from Africa to Europe, but also between different African countries,” she noted, and said this was a complex and shared phenomenon which required a coherent and global approach.

Within this framework, therefore, she said they had been working with Ghana in the past year and strengthened political dialogue and high-level contacts with the visit of their Minister of the Interior to Ghana on February 20 and that of Ghana's Deputy Minister for Foreign Affairs and Regional Integration, Mr Charles Owiredu, to Spain.

Next month, the Minister of Energy will be participating in Spain in AFRICAGUA, an international event of reference in the field of water and renewable energies, she disclosed.

Mrs Perez del Pulgar stressed that Spain continued cooperating with the Ministry for the Interior and the Ghana Immigration Service (GIS) to inform the general public, especially the youth, on the dangers of irregular migration and have funded a Migration Information Center in Tamale to provide expert advice on safe and legal migration, saying this is the second centre of its kind after Sunyani.

Spain, she noted, was also cooperating on security matters with a focus on the fight against organised crime and on building capacity for personnel of GIS and other security agencies, with particular focus on border management, intelligence and the provision of logistics to the Ghana Police Service.

The Ambassador said Spain, as a member state of the European Union was well aware of the benefits in terms of peace, democracy, stability, growth and prosperity that regional integration could bring.

She said that had become ever more important in the globalised and interdependent millennium we live in, in which challenges far exceeded the limits and capabilities of our nation states, adding that we need to draw up a shared project to implement the 2030 Agenda with its 17 Development Goals and to address geopolitical challenges such as violent extremism, cybercrime, economic and social inequality and of course the climate emergency.

In 2019, the Year of Return in which Ghana sought to encourage the people of African descent to make their “birthright journey home”, as part of the global

African family, she highlighted a salient feature of the country, which is her commitment to Pan-Africanism and the promotion of regional integration and African Unity.

She said it was only natural, therefore, that Ghana should have been the country chosen by the Heads of State of the African Union to host the Secretariat of the African Continental Free Trade Area (AfCFTA).

“The AfCFTA will no doubt contribute to unlocking the economic potential of this continent”, she stated, and noted that it was a clear sign of a renewed drive among African leaders to bring development, progress and a promising future to their people.

She also noted that Ghana had been at the forefront of this vison with the Ghana Beyond Aid Strategy and her determination to become a self-reliant country through the proper management and use of its own abundant resources.

She observed that Ghana continued to increase her share in their economic and commercial relations, and said their trade with this continent had increased by 250 per cent in the last 10 years.

Together with the support of the Economic and Commercial Office of the Embassy, she said the Ghana - Spain Chamber of Commerce was established this year, to foster business and commercial relations.

For the first time in many years, she said Ghana and Spain held a Trade and Tourism Forum in Las Palmas from September 12 to 14 this year, to explore ways of collaboration in the development of sustainable tourism and trade.

Spain is also interested in supporting creativity and all kinds of artistic expression, she noted and it was in line with this that a Vis a Vis cultural cooperation project was organised by Spain’s public diplomacy institution, Casa Africa, with the support of the Ministry of Tourism, Arts and Culture of the Ghanaian government, the Creative Arts Council and the collaboration of MUSIGA.

The musical competition selected two Ghanian bands out of 65 to perform in the Musical Summer Festivals held in Spain.

“Thanks to the spectacular production and amazing talent and high quality of all the bands and particularly the two winners: FRA and Kyekyeku & Ghanalogue Highlife, the tenth edition of this programme has been one of the best organised ever she stated.”

The Ambassador was happy that a number of officials, including ministers of state, Members of Parliament (MPs), members of the diplomatic corps, traditional and religious leaders, among others joined them to celebrate the National Day, which commemorated the birth of thir country as a modern Ssate, over 500 years ago.

Mrs Perez del Pulgar noted that it was a significant time for Spain as in less than a month they would be holding their general general election.

“At a crucial moment in the political history of our country, I would like to recall the constructive spirit, enormous generosity, effort and political maturity of all the Spanish people when we approved our current Constitution in 1978.

This Constitution paved the way to the greatest period of harmony, economic growth and welfare in the history of our country, “ she added.

• Writer’s email: This email address is being protected from spambots. You need JavaScript enabled to view it.