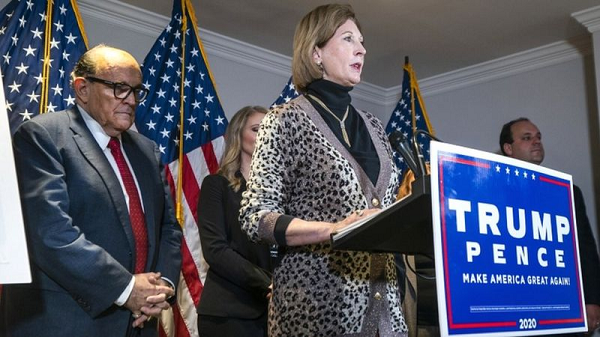 Sidney Powell at a press conference on Thursday alongside Ruby Giuliani
30.5k Shares

The Trump campaign has distanced itself from a lawyer who made dramatic claims of voter fraud at several media events.

Sidney Powell claimed without evidence last week that electronic voting systems had switched millions of votes to President-elect Joe Biden, and said he won due to "communist money".

Mr Biden won the US presidential election by a significant margin.

He is projected to win 306 votes in the US electoral college, which determines who becomes president - far above the 270 needed to win.

On Sunday, the Trump campaign issued a statement saying Ms Powell was "practising law on her own" and was "not a member of the Trump legal team".

"She is not a member of the Trump legal team. She is also not a lawyer for the president in his personal capacity," Trump campaign lawyers Rudy Giuliani and Jenna Ellis said in the statement

In a statement released to CBS, Ms Powell said she understood the statement issued by Mr Giuliani and Ms Ellis, and that she would soon be filing a lawsuit over her unsubstantiated allegations of voter fraud.

A tweet from President Trump earlier this month explicitly named her as part of the team, referring to her as one of his "wonderful lawyers and representatives".

Both Mr Giuliani and Ms Ellis had attended the Thursday news conference alongside Ms Powell, where she said, without providing evidence, that electronic voting systems switched millions of ballots to Mr Biden, and that he also won thanks to "communist money".

Other outlandish claims she made without evidence include that she had a voter fraud case in Georgia and that a court filing she hoped to submit over the case would be "biblical" and "blow up" Georgia.

Mr Biden's win in Georgia has been officially certified by Republican Secretary of State Brad Raffensperger, following an audit.

Ms Powell also said that some voting software was created at the direction of late Venezuelan President Hugo Chavez and that votes for Mr Trump had probably been switched in favour of President-elect Joe Biden.

Ms Powell is a conservative activist and former federal prosecutor.