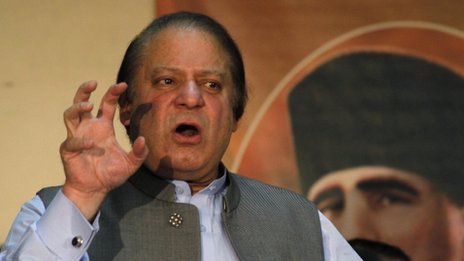 Pakistan's new Prime Minister Nawaz Sharif has called for an end to US drone strikes in his first address since being re-elected to the post.

"We respect the sovereignty of others and they should respect our sovereignty and independence. This campaign must come to an end," he told MPs.

Mr Sharif, who was ousted in a 1999 coup, will be sworn in later for an unprecedented third term as PM.

He faces numerous challenges, including Taliban attacks and a crippled economy.

The BBC's Orla Guerin in Islamabad says that Mr Sharif's re-election is an extraordinary comeback for the centre-right leader.